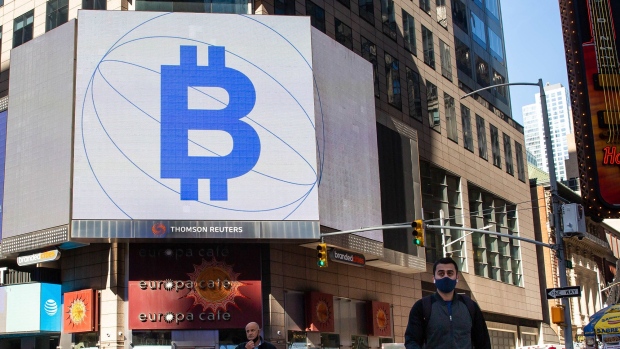 Monitors display Coinbase and Bitcoin signage during the company's initial public offering (IPO) at the Nasdaq MarketSite in New York, U.S., on Wednesday, April 14, 2021. Coinbase Global Inc., the largest U.S. cryptocurrency exchange, is set to debut on Wednesday through a direct listing, an alternative to a traditional initial public offering that has only been deployed a handful of times. , Photographer: Bloomberg/Bloomberg

(Bloomberg) -- The cryptocurrency universe got its long-awaited wish: Not one, but two U.S. Bitcoin-linked exchange-traded funds finally launched, bringing further mainstream acceptance and a flood of cash.

But after the stunning success of the ProShares Bitcoin Strategy ETF (ticker BITO) -- which accumulated more than $1 billion in assets in just days -- the stakes are higher than ever for the queue of issuers hoping to gain a foothold in the sector. Indeed, when the Valkyrie Bitcoin Strategy ETF (ticker BTF) debuted Friday, 3.1 million shares changed hands. That compares with the 24 million BITO shares traded at Tuesday’s launch, which unleashed enthusiasm that helped send Bitcoin to record a day later.

Those could be worrying stats for the firms behind seven pending applications for futures-based ETFs that are now in front of the Securities and Exchange Commission and most likely to win clearance next. Meanwhile, Grayscale Investments LLC filed to convert its $40 billion Bitcoin fund into a physically backed ETF that would track the cryptocurrency -- a structure that U.S. regulators have yet to approve but would be a game changer.

The $6.8 trillion ETF industry is notoriously fierce. Issuers, forced to try to stand out in an over-saturated market, duke it out among one another by offering exposure to thematic industries or by continuously decreasing their management fees or luring in investors through quirky tickers.

It’s also historically been assumed that whoever receives approval first stands to reap the greatest benefits -- including industry recognition as well as potentially attracting huge amounts of cash. Crypto may not be exempt from this trend.

“First-mover advantage can have pretty significant benefits from an AUM perspective as investors go to allocate,” Makara’s Proudman said, referring to assets under management. “I don’t think there’s room for nine different ETF products all representing the same physical asset so I think attrition of some of these applications is inevitable.”

Some analysts anticipate BITO will continue to attract more cash, perhaps even as much as $50 billion in the ETF’s first year given the hype around it, predicted Bitcoin bull Tom Lee, co-founder of Fundstrat Global Advisors.

Another way that fund issuers stand out is by cutting their fees to rock-bottom levels -- a trend that is already forming in the still-nascent Bitcoin ETF arena. VanEck’s pending Bitcoin Strategy ETF (ticker XBTF) -- expected to launch as soon as next week -- will carry a management fee of 0.65%, meaning $6.50 for every $1,000 invested. That would undercut the 0.95% expense ratio carried by BITO and BTF.

While BTF may be the pricier option, Valkyrie’s deep expertise in crypto markets is worth more than the 30 basis-point difference, according to the firm’s chief executive.

“Other asset managers are in the ETF business and we’re embedded in the crypto market,” Leah Wald, Valkyrie Funds CEO, said on Bloomberg’s “QuickTake Stock” streaming program Friday. “At the end of the day, investors can choose whether they want subject-matter expertise and the ability to pivot as needed, or again, they can go with a bit of a monolith that maybe cares more about launching their next fund than prioritizing Bitcoin.”

It’s in the best interest of investors to have multiple options, says Ophelia Snyder, co-founder and president of 21Shares, which has two live filings, including one for an ETF tracking futures that’s got the backing of Cathie Wood.

“At the end of the day, what this is all about is getting people into the sector,” she said by phone. “There’s a philosophical element to this, which is getting that accessibility out there and showing how well-established the space now actually is -- and a cohort of well-structured, well-built products from established and respected managers is exactly what this space needs.”