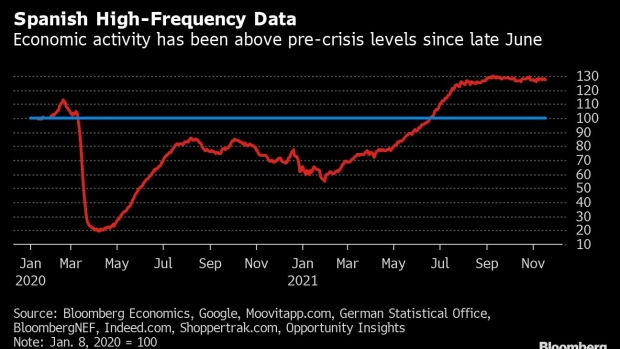 Growth numbers that missed expectations in the past two quarters have turned the Spanish economy from a potential leader of the region’s post-pandemic revival to a laggard, trailing nearby France and Italy.

Many experts aren’t convinced, however. They argue that high-frequency data and indicators like demand for construction materials and a jump in credit-card spending paint a much rosier picture for the eurozone’s fourth-biggest economy.

The reality will be vital for the government, which is defending this year’s forecast for 6.5% expansion -- the fastest pace since 1973.

“What explains the oddity is that we could be underestimating gross domestic product and there’ll be an upward correction down the line,” he said.

Economists attribute the data discrepancies to the rigid methodology at the national statistics institute -- known as INE-- coupled with obstacles posed by the coronavirus in gathering information and gauges output.

INE officials held an informal meeting with analysts on Tuesday to clarify doubts over how it makes its calculations. But its press office denied a report in the El Pais newspaper that it told economists it plans to revise its third-quarter GDP estimate.

In written response to questions, the INE said it hasn’t detected problems in how it compiles information, and that the percentage collected is very high.

But when the institute slashed its second-quarter GDP figure to 1.1% in September, it warned that the “inherent difficulty of measuring the conjuncture we have been facing since the first quarter of 2020” must be considered. That surprise revision made achieving the government’s full-year projection all but impossible.

His team argues that measuring activity using traditional indicators involves a clear lag and is more prone than ever to revisions because of the pandemic.

Analyst projections have been cut since the INE downgrade: the economy is seen rising 4.6% in 2021 in the latest Bloomberg survey. While that’s far above the 2.8% average in the five years before Covid, it’s disappointing with output still 6.5 percentage points below pre-crisis levels.

There are certainly drags on growth.

While improving quickly, foreign tourism hasn’t matched that of locals and renewed lockdowns in Europe could further limit trips. Domestically, inflation near a 30-year high is threatening to eat away at consumer confidence. European Union stimulus of 9 billion euros ($10.1 billion) is only trickling into the economy slowly.

Almost three-quarters of a million jobs were created between May and November, helped by the rebound in homegrown travel. Elsewhere, credit-card spending is increasing in double digits compared with 2019, while mortgage applications, home sales and income-tax revenue have all surpassed pre-crisis levels.

It’s these indicators that the government leans on as the basis for maintaining its outlook.

“I’ll stick with the evolution of the labor market, which is what really matters,” Economy Minister Nadia Calvino said in a recent television interview. Her ministry uses a synthetic indicator encompassing data like electricity consumption and credit-card purchases to measure the economy’s “real pulse regardless of other indicators that are important but are slightly behind,” she said.

For Jose Luis Calvo, a professor of mathematical economics at Madrid’s UNED University, the truth may lie somewhere between the cabinet’s optimistic forecasts and the underwhelming official statistics.

“The recovery is probably stronger than GDP data shows, but not as strong as the government says,” he said. “The Spanish economy isn’t the locomotive of Europe, nor the lorry at the back of the line.”

How comfortable INE is with its earlier estimates of economic expansion will become clearer on Dec. 23, when it publishes final figures for the third quarter.

Angel Talavera, head of European economics at Oxford Economics, suspects the true shape of Spain’s recovery will only become clear when official data are re-examined -- and may prove more robust than has been reported so far.

In particular, he cites a puzzling plunge in how much workers are producing.

“This apparent collapse in labor productivity, for which we don’t have an obvious economic answer, makes us suspect measurement issues of some sort,” he said in a report. “We think it likely that we’ll see revisions.”