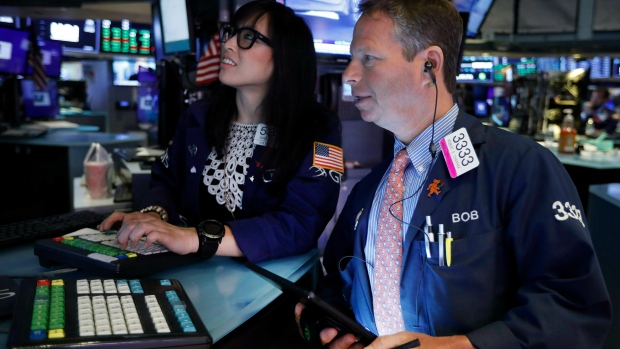 Traders work on on the floor of the New York Stock Exchange. , AP Photo/Richard Drew, File

With U.S. stocks at record highs, investors are betting that the party will continue.

The three largest exchange-traded funds that track the S&P 500 Index took in a combined US$6.2 billion last week, just as the benchmark topped 3,000 for the first time, data compiled by Bloomberg show. Of the more than 1,600 U.S.-listed equity ETFs, these three -- known by their tickers SPY, IVV, and VOO -- received more cash than any other funds in one of their best weeks of 2019.

Investors are “all-in on equities,” Steven DeSanctis, a U.S. stocks strategist for Jefferies wrote in a Monday report. Much of the cash that flowed into ETFs last week went to large-cap funds designed as core holdings, he wrote.

The sizable inflows come as debate rages over whether or not U.S. stocks can extend their more than 20 per cent return this year. A rate cut from the Federal Reserve later this month is viewed by markets as virtually certain, potentially supporting equities. But there’s a creeping concern about the slowing of both the global and domestic economy, just as companies are set to post their first profit decline since 2016.

The S&P 500 was little changed as of 10:56 a.m. in New York on Monday, after Citigroup Inc. became the first major bank to report second-quarter earnings.