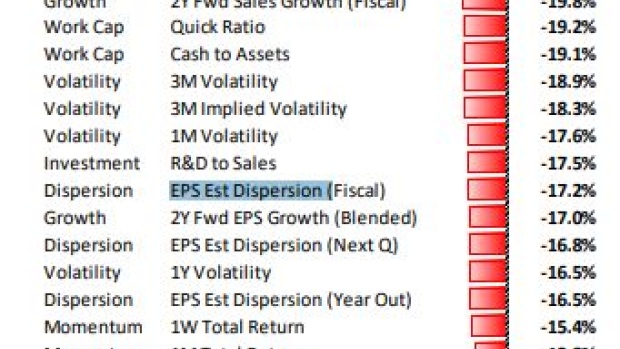 (Bloomberg) -- In a year rife with uncertainty, stock-market investors have sought refuge in predictable profit producers.

Just last week, the CBOE Volatility Index, or VIX, surged to the highest point since February as investors grappled with news of the omicron variant and hawkish comments from Federal Reserve Chair Jerome Powell.

Against such an unpredictable macroeconomic backdrop, some investors are seeking the shelter of certainty.

As a result, companies with more closely clustered fiscal-year earnings-per-share estimates among Wall Street analysts have far outperformed those that foster widely divergent expectations, according to Bespoke Investment Group.

Those more predictable companies have outperformed the latter -- which the firm calls “high dispersion stocks” -- by 17.2% this year, according to Bespoke. The scale of the outperformance is similar when taking into consideration EPS estimates for upcoming quarters and a year out.

“What’s been deciding the winners and losers in the last couple of earnings cycles is those companies that prove they have a predictable earnings stream in an environment of very volatile input costs,” said Keith Buchanan, portfolio manager at Globalt Investments.

“It’s coming down to margins,” he added, “If the market can’t really have a good grasp on what it expects the margins to do over the next 12 to 18 months, that leads to a lack of performance.”