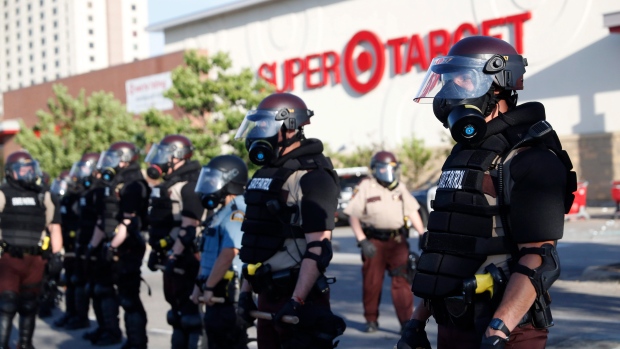 It’s called the “Minnesota Paradox”: the clash of progressive images and racial divides that roils the Gopher State. The puzzling phenomenon also exists at Target, whose downtown Minneapolis headquarters lies a short drive from the spot where George Floyd died at the hands of the police.

With a history dating back more than a century, Target is a pillar of the Twin Cities business community, and its red bullseye logo is ubiquitous. The retailer operates 56 stores in the region that employ more than 30,000 people. A generous donor to civic causes, it has reflected the cities’ oft-cited liberal image on issues such as transgender rights, guns and people with disabilities.

But on race — the issue that now has rent Minneapolis and cities across the nation — Target’s record is less happy. Only two years ago, the company settled a class-action lawsuit that accused the retailer of racial discrimination in hiring. It has fallen short of its own goals to retain minorities. Today, only two of its 51 top executives are black.

Chief Executive Officer Brian Cornell has spent the past six years trying, with mixed success, to make good on his pledges for greater diversity. Then the nation erupted over the killing of Floyd on May 25 — and Minneapolis and its own long history of racial inequality was thrust into the spotlight. All of this stands in sharp relief to Target’s cultivated image as the cheap-chic Tar-zhay, style maker of suburbia.

“It’s critically important that our team — at all levels — reflect the diversity of our guests and the communities around us,” Target spokesman Joshua Thomas said in a statement. “Like many other companies, we’re focused on increasing diversity across the company and that includes our most senior-level leaders. We’re committed to hiring diverse talent and providing our team with the training, experiences and opportunities to develop as professionals and leaders within the company.”

Target’s not the only company in the Twin Cities to struggle with diversity: Senior leadership teams at places such as Medtronic, Best Buy and 3M also are dominated by white faces. The black-white disparities inside Minnesota-based businesses reflect those of the state overall: The poverty rate among blacks is four times higher than for whites, one of the biggest gaps in the country, according to Census Bureau data.

Few companies have been stung by the recent racial upheaval more than Target. Its store at 2500 E. Lake Street was looted and partially burned, and others were damaged. At one point, Target’s website listed 70 stores across the state that were shuttered, but the company later amended that to say just six in the city had been closed. Across the country, about 200 of Target’s 1,900 locations were affected in some way last weekend.

The company’s unfortunate role in the unrest cast a spotlight on Cornell, raising the bar on his response. Cornell already was on a crisis footing, having spent the past three months grappling with the coronavirus. The CEO, who declined to comment through a spokesman, focused on his own staffers before saying anything publicly. On the morning of May 28, he sent an email to headquarters employees and store leaders.

But more was needed, especially after the devastation wrought upon the city and Target that evening. Brands including ice-cream maker Ben & Jerry’s and YouTube made donations and issued statements decrying the killing, illustrating how American companies can no longer shy away from hot-button issues including racism and income equality. Almost three out of four people say CEOs should “take the lead on change” rather than waiting for the government to act, according to an annual survey from public-relations firm Edelman.

“The role that government once held as the arbiter of societal rights and wrongs has shifted over to Corporate America,” said Ron Culp, an expert on crisis management and former head of public relations at Sears, who now teaches at DePaul University.

There can be repercussions for companies that don’t step up: Two out of three consumers now choose a brand based on its stand on social issues, Edelman found, up from about half who said so in 2017. Still, critics contend that few corporations actually back up their lofty words with actions. Companies need to “make progress, not promises,” Edelman CEO Richard Edelman said May 31.

Target has not shied away from controversy. The retailer prohibited the open carry of firearms in stores long before other chains followed suit. In 2015, Target said it would stop using gender-based signs for toys. A year later, the company publicly welcomed transgender employees and shoppers to use restrooms corresponding with their gender identities. The move sparked a backlash from conservative groups, some of whom organized a boycott.

On race, though, Target has made more promises than progress. Two former senior executives, who asked not to be identified, said African-Americans often would turn down job offers because of its lack of black leaders and the fallout from the discrimination settlement.

To help change things, Cornell has taken part in many conversations and listening sessions with Target’s employees in recent days, including an emotional May 29 Skype call hosted by the company’s African-American Business Council that attracted more than 7,000 staffers. Cornell’s statement on Floyd’s death, issued later that evening, said the company would donate time, money and resources toward not only its own stores but also local small businesses. On June 5, Target pledged US$10 million to social-justice organizations and community rebuilding.

“Target is a part of this community and we share its pain,” Target spokesman Thomas said in his statement. “The murder of George Floyd has brought to the forefront a number of very important topics, both for our country and businesses like Target. We will use our size, scale and resources to drive positive change that’s tangible and felt across all stakeholders, including team members, our guests and the broader communities we serve.”

The retailer plans to organize its ongoing response and local outreach through a task force that includes the company’s chief diversity and inclusion officer.

“Many of these statements are good, but Cornell’s is more specific than the others in terms of what they are going to implement,” Culp said.

Community leaders were impressed. “It made me cry,” said Sondra Samuels, president of the Minneapolis Northside Achievement Zone, a consortium of organizations and schools, financially supported by Target, that seeks to close the academic performance gaps between white and minority students.

Employee reaction to Cornell’s words was mixed, with some calling them sincere and others more skeptical, illustrating that Target still has a way to go.

“I’m grateful for what they’re doing,” said a post on an online message board frequented by Target staffers, “but it’s the very least they could do.”