Why financial advisors need to start thinking about millennial appeal

Welcome to Bloomberg Work Wise, a series of reports aimed at helping young professionals navigate their way to financial and career success.

Sophia Bera wants to make something crystal clear: She is not your father’s financial planner.

That’s Bera’s marketing tagline, and evidence of it is all over the 35-year-old’s website. There’s the personal brand on display at her company, Generation Y Planning. There’s the focus on values and meaning: “Money doesn’t have to be scary or serious all the time. Money can be about joy, security and confidence.” And there’s the way this certified financial planner operates: virtually, and on a monthly subscription basis. Bera is currently working remotely from Mexico City for a month, after spending a month each in Santiago, Chile; Lima, Peru; and Medellin, Colombia.

If Bera and other young planners push the “not your father’s planner line” heavily, it’s because it resonates with an audience that’s skeptical of traditional financial advisers and, in any case, wouldn’t get much personalized attention from most of them.

More than that, it signals that these young planners understand the competing priorities for millennial cash flow, and aren’t going to dish out condescending lectures on the importance of saving for retirement from Day 1, or tell them not to spend money on travel.

“If you’re 65 and your closest interaction with millennials is your kids, you might not have the perspective you need to address the realities of what it’s like to have two working spouses who commute, who bear student loan debt and are trying to start a family and save for a home,” said Douglas Boneparth, the 34-year-old founder of New York City-based Bone Fide Wealth.

The financial planning industry needs more practitioners who can connect with younger, less wealthy customers, said Bera, who has built up a book of 95 clients. For example, many of her customers are dealing with fertility issues.

“Do you think someone’s going to tell some 65-year-old white dude, ‘Hey, we’re having trouble getting pregnant, can we take US$20,000 out of savings?” she said. “They won’t.” Bera said that when her clients get pregnant, their first call is often to their mother, to freak out about childcare costs. Their second call is to her. 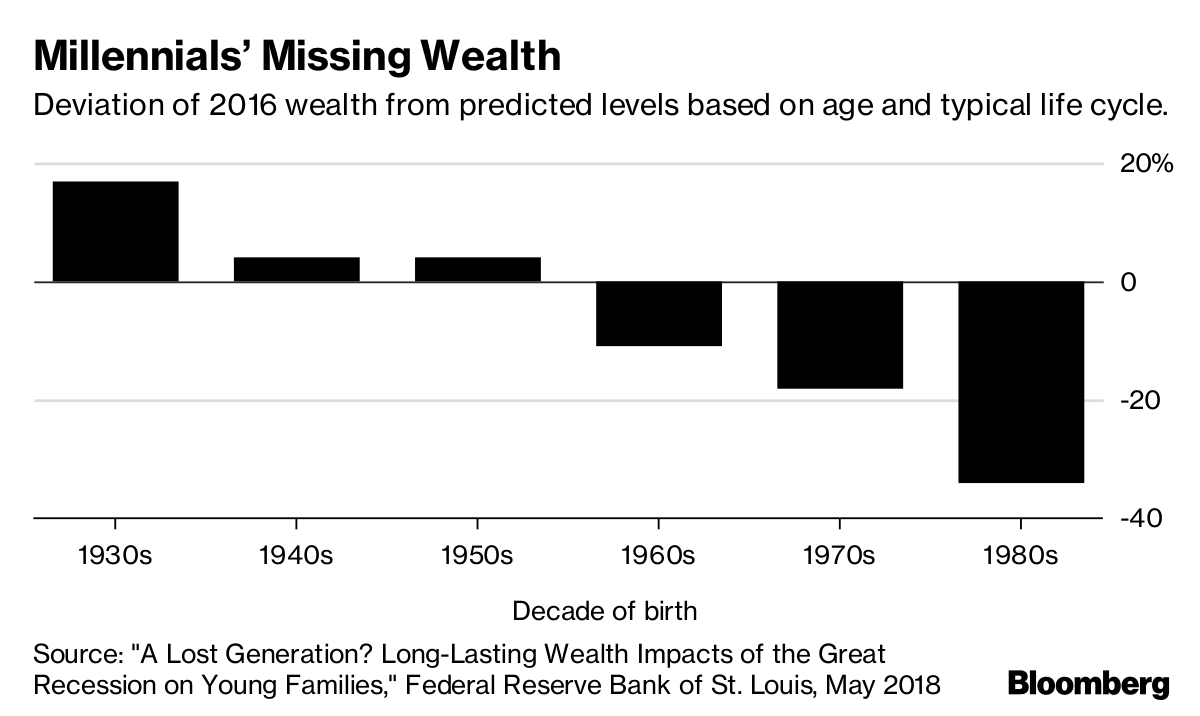 Teacher-turned-certified financial planner Ryan Frailich, of New Orleans-based Deliberate Finances, can attest to the balancing act he and his peers face. Frailich and his wife recently spent part of a weekend “discussing the balancing of her grad school cost and a second child in the next one or two years, and my retirement contributions and a home renovation to make space if and when we have that second child,” he said. (They have a 2-year-old, and have decided not to prioritize saving for college costs yet.)

Frailich, 33, is part of the XY Planning Network, a hub for fee-only planners focused on providing financial guidance for Generation X and Generation Y clients. The site says its planners are there “to help you live your great life.” Most advisers offer services for a monthly fee that varies widely—from $75 to $400. (Bera recently raised her monthly fee to $299, and clients pay $2,500 up front.) Customers can often pay by the hour, quarter or year. They can also choose to pay on a percentage of assets under management.

It’s telling, however, that many of the thumbnail adviser biographies on the XY site don’t even mention retirement. That’s not to say the financial planners won’t work with clients to help them find a livable balance between spending and saving, both for the short- and long-term. But saying to a millennial that they need to make their golden years a priority will only show you can’t relate, said Boneparth, who isn’t a member of the network.

“Millennials don’t need to be guilted into a way of thinking that doesn’t suit them,” he said. “They need to be told it’s okay if they want to focus on short-term goals.”

When you consider the defining characteristics of the millennial generation—starting careers in the shadow of the Great Recession and squarely behind an eight-ball of student debt—focusing on more manageable milestones begins to make sense.

A few decades ago, young Americans graduated with loans they could pay off in 10 to 15 years. “Now you see people who could be paying a couple of hundred dollars a month for 40 years—or worse,” Frailich said. While moving to income-based repayment plans can ease the monthly burden (if you qualify for one), there’s a long-term downside—you’ll be paying the mounting interest rather than the principal.

Of course, the student lending industrial complex won’t mind if you pay interest the rest of your life. But you might. Other unhappy economic realities facing millennials and Generation Z include wages that have stagnated over the past decade and housing, childcare, education and healthcare costs that have risen dramatically.

Fifty years ago, an American family could live on one salary with less of a struggle. Nowadays, the entirety of one spouse’s wages often go to childcare and healthcare. Raising a family on one income just isn’t possible for most. And while baby boomers have enjoyed a long bull run in the stock market, younger workers with minimal retirement savings haven’t benefited nearly as much.

As terrible as all this sounds, there is some good news: For many people, it’s still possible to start putting a little money away for one’s later years. One thing millennials and Generation Z do have going for them is time.

Starting to save regularly, however small the amount, can still pay off big. Fidelity Investments calculated how much a one per cent increase in contribution to a tax-advantaged retirement plan could mean for a 35-year-old currently making US$60,000. That extra contribution—the equivalent of about $12 more a week—translates into US$85,492 more in the kitty come retirement. Fidelity’s calculation assumed a 5.5 per cent return and annual increases in salary of 4%.

Apps that gamify savings can also make finding cashflow to divert into your savings or investment account a little less daunting.

Qapital and Tip Yourself allow users to set up regular or occasional withdrawals from linked checking accounts into savings. Qapital enables users to set up their own parameters for when money is moved into savings, such as the “guilty pleasure” rule. Whenever you indulge in one, a set amount of money goes into savings. “Tip yourself” provides a twofer benefit—you “tip” yourself for virtuous things like going to the gym, both saving money and reinforcing good habits.

Building up a pot of emergency savings can avoid a lot of pain, too. Having a few months’ worth of expenses saved may mean not needing to rack up costly credit card debt when the unexpected strikes. That cash could sit in an online savings account earning interest—there are several online money market and savings account with annual percentage yields (APY) that top two per cent.

If your company matches 401(k) contributions, any sentient planner will urge you to put in enough to get the full match. If an employer doesn’t offer a 401(k) plan, savers may be able to contribute up to $6,000 pre-tax to a traditional individual retirement account, where earnings on money compounds, tax-free, until it’s withdrawn decades later.

Younger employees with some extra cash flow may prefer a variation on the traditional 401(k) account, one funded with after-tax dollars—Roth individual retirement accounts or a Roth option within a 401(k) plan. Once your after-tax money goes into a Roth, earnings on it grow tax-free, and there are no taxes to pay on your contributions when you withdraw money in retirement. Roths make a lot of sense when someone is starting out and is in a low tax bracket. As long as your modified adjusted gross income is below $137,000 as a single person, or below $203,000 as a married couple filing jointly in 2019, you can open a Roth IRA, although the amount you can put in starts to fall at incomes of about $120,000. There is no such income limitation for taking part in a Roth 401(k).Any thought of retirement savings, however, pales next to what weighs heavily on many young professionals: School loans.

Focusing on debt can make sense “even if the interest rate on it is low and it’s financially prudent to invest more rather than pay off loans,” Bera explained. “Debt is stressful. No client has regretted paying off their student loan.”

But there’s a price to be paid down the line. Frailich worked with a couple, both with advanced degrees, who had about $160,000 of student debt. When the couple was starting out, they qualified for an income-based repayment plan, and went on one. Ten years down the line, the amount they owe has swelled to about $210,000.

“They basically burned all the money they paid on their loan,” said Frailich. “But when they made that decision, it was the right choice.”

Student debt also pushes off a traditional life milestone for earlier generations—the erstwhile “American Dream” of owning a home. With high housing costs in many urban centers, it’s hard for millennials to cobble together enough for a down payment.The good news is that, on a purely financial basis, housing isn’t a good investment for many young people anyway, Frailich said. “They are realizing that a 2,000-square-foot house that you have to heat and cool and repair could be a huge suck on their time and their money,” he said.

Those young adults who do take on mortgages are sometimes following dated advice from their parents, said Frailich. The old adage was that you should pay more than the minimum each month, slicing a 30-year mortgage down to 25 years. Frailich said that strategy makes less sense today, when you think about what a good deal a 30-year loan at four per cent can be. It may make less sense to focus on paying down a mortgage than to, say, build up an emergency saving fund or start to save for retirement.For those young folks still dead set on buying a home, there’s another hurdle. With billions of dollars in delinquent student loan debt, a lot of people will have serious dings on their credit — ones that won’t go away for 7 years. Combine that with a tight home loan market—only 10 per cent of mortgages were originated to borrowers with credit scores under 647— and you might just want to keep renting.