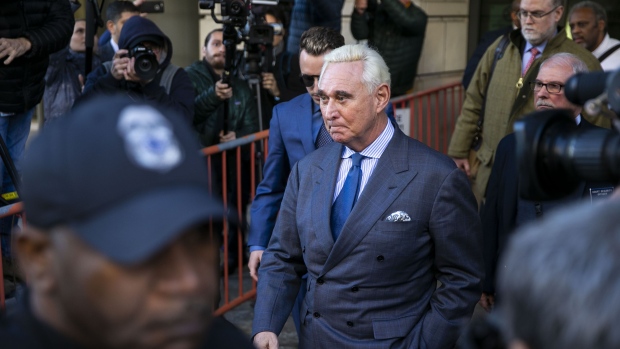 Three federal prosecutors resigned from the Roger Stone case on the same day that the Trump administration backed away from a harsh sentencing recommendation for the president’s longtime ally.

In court filings to the judge who will sentence Stone, Aaron Zelinsky announced his withdrawal from the team that prosecuted the Republican operative. Zelinsky, who didn’t give an explanation for his move, will continue working as a federal prosecutor in Maryland, according to a person familiar with the matter.

Two other prosecutors on the case -- Jonathan Kravis and Adam Jed -- also withdrew from the case. Kravis said he would quit his job as an assistant U.S. attorney.

The resignations come just hours after the Justice Department signaled it was rethinking its recommendation that Stone serve as long as nine years in prison for lying to Congress and witness tampering; hours earlier, President Trump had criticized the request. Zelinsky, Kravis and Jed were three of the four prosecutors who signed that sentencing memorandum.

A new filing, submitted Tuesday after their resignations, cut the proposed sentence recommendation in half.

“The idea of our president interfering with the criminal justice system in such a way is extraordinary and frightening,” said Sharon McCarthy, a former Manhattan federal prosecutor now in private practice. “If I were the prosecutor on that case I would submit my resignation.”

This is a horrible and very unfair situation. The real crimes were on the other side, as nothing happens to them. Cannot allow this miscarriage of justice! https://t.co/rHPfYX6Vbv

The blowback from Democrats was swift. Senate Democratic leader Chuck Schumer said he will be sending a request to the Justice Department inspector general asking for an investigation into the reduced sentencing recommendation for Stone.

Zelinsky was part of the team led by Robert Mueller that investigated potential Russian interference in the 2016 election. Before joining the special counsel’s office, Zelinsky was a federal prosecutor in the Maryland U.S. Attorney’s Office under Rod Rosenstein, who would go on to become deputy attorney general. He also worked as a lawyer at the State Department during the Obama administration and clerked for two Supreme Court justices from differing ends of the political spectrum -- John Paul Stevens and Anthony Kennedy. He attended law school at Yale.

Kravis worked in the public integrity section of the Justice Department’s criminal division. He was associate White House counsel during the Obama administration and clerked for Judge Merrick Garland on the U.S. Court of Appeals.

Stone is due to be sentenced by U.S. District Judge Amy Berman Jackson in Washington on Feb. 20. Judges have leeway in deciding on a sentence and need not follow the Justice Department recommendations.

On Monday, the government said in a sentencing memorandum that Stone deserved a tough prison term for his crimes because he posted an image of the judge overseeing his case with cross-hairs next to her head. He also violated a court order by repeatedly posting about the case on social media.

But on Tuesday, the Justice Department said in a new filing that the earlier recommendation “does not accurately reflect” its position “on what would be a reasonable sentence.” While Stone’s crimes warrant jail time, they said the suggested term of seven to nine years “could be considered excessive and unwarranted.”

Prosecutors said an appropriate sentence would be from 37 to 46 months behind bars. The brief was signed by John Crabb Jr., the acting chief of the criminal division in the U.S. attorney’s office in Washington.

Stone, 67, has argued he’s already been punished by his public trial and loss of professional standing. His age, health, and status as a first-time offender convicted of a non-violent crime don’t warrant a prison sentence, he said in a court filing Monday. He asked for probation.