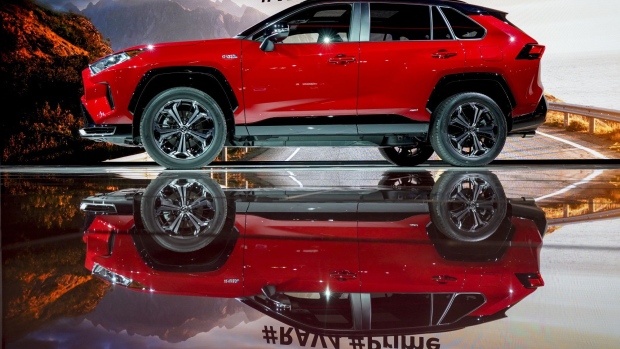 (Bloomberg) -- Toyota Motor Corp. has used up a key US tax credit for hybrid and electric vehicles, a milestone that the automaker says will raise its costs and hinder adoption of climate-friendly cars.

The company said Friday that it sold 3,876 plug-in hybrid and electric cars in June. The US allows automakers to offer a $7,500 tax credit to buyers of fully or partly electric cars, but only up to 200,000 per company. Toyota’s cumulative sales of eligible vehicles have now surpassed that threshold, according to data compiled by Bloomberg and confirmed with the company.

The Japanese manufacturer becomes the third automaker to hit the limit, joining General Motors Co. and Tesla Inc. Demand for hybrid and electric vehicles has steadily grown in the US, especially as gasoline prices surge above $5 a gallon in some states.

Toyota and its rivals have lobbied Congress for an extension of the tax credits, but they disagree on who should be eligible. Toyota and Tesla oppose a proposal by the Biden administration to offer an additional $4,500 in credits to unionized carmakers, a position favored by GM, Ford Motor Co. and Stellantis NV.

Absent Congressional action, Toyota’s credits will gradually be reduced over a one-year period once the Internal Revenue Service determines the cap has been reached. The credits will be halved twice over 12 months before running out entirely.