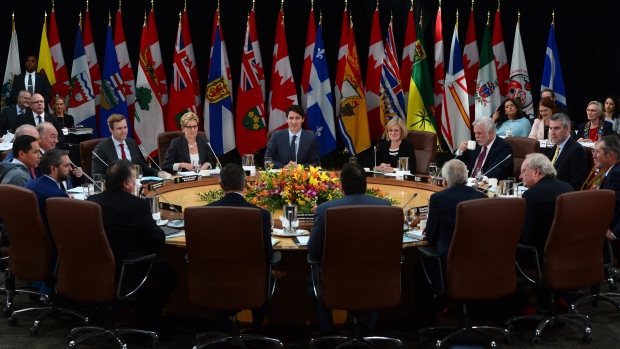 OTTAWA -- With Canadian companies facing a hardening of the border with the United States, Justin Trudeau wants to talk with his provincial and territorial counterparts later this year about breaking down trade barriers from within.

The prime minister announced Thursday he will host a first ministers meeting in the fall aimed at making the country's economy more interconnected.

The gathering will likely also be the first opportunity for long-time Liberal MP Dominic LeBlanc to sit down face-to-face with all of the premiers as the federal minister responsible for intergovernmental affairs, a portfolio he took on when Trudeau shuffled his cabinet Wednesday.

It makes little sense that companies based outside Canada are met with fewer restrictions to Canadian markets than Canadian companies from within their own country, Trudeau said in a statement.

"Foreign companies shouldn't have easier access to Canadian markets than Canadian companies from another province."

Trudeau has pledged to hold meetings with the premiers annually.

The announcement of the theme of their latest get-together came after premiers were briefed on international trade issues by Canada's ambassador to the U.S., David MacNaughton, at their gathering Thursday in New Brunswick.

Canadian steel and aluminum producers were slapped last month with punitive duties on exports to the United States and car makers face the prospect of further tariffs on automobiles and auto parts crossing the border.

Ontario's auto industry would be particularly hard hit by such tariffs, and while the newly installed Progressive Conservative government under Premier Rob Ford has fundamentally disagreed with the federal Liberals in some key areas, such as on carbon pricing, it stands "shoulder-to-shoulder" with Ottawa when it comes to reducing trade barriers, the province's economic development minister said Thursday in Washington.

A statement from the Prime Minister's Office did not provide details on the exact timing and location of the first ministers meeting.

The federal government said internal trade is worth about $370 billion, or just under one-fifth of the country's overall economic output.

It predicts that removing interprovincial trade barriers could create an economic benefit roughly comparable to the projected benefit of the Canada-European Union free trade agreement known as CETA.