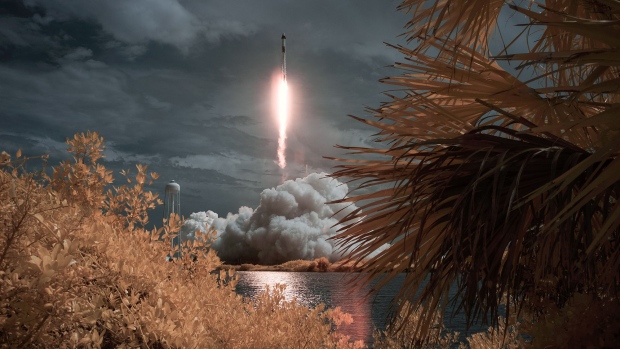 In this NASA handout image, A SpaceX Falcon 9 rocket carrying the company's Crew Dragon spacecraft is seen in this false color infrared exposure as it is launched on NASAs SpaceX Demo-2 mission to the International Space Station with NASA astronauts Robert Behnken and Douglas Hurley onboard, Saturday, May 30, 2020, at NASAs Kennedy Space Center in Florida. Getty Images/Bill Ingalls

The video, which opens with President John F. Kennedy’s 1962 speech declaring that America would go to the moon, features several recent images of NASA astronauts Bob Behnken and Doug Hurley. The federal agency doesn’t allow the astronauts it employs to have their likenesses displayed in any advertisements or marketing materials.

NASA was not aware of the ad until it became public, a spokesperson said. A spokeswoman for the Trump campaign said Wednesday the footage was collected from publicly available resources. The video ends with the disclaimer that it was paid for by the campaign and approved by Trump, which is required by the Federal Election Commission.

Behnken and Hurley blasted off to the International Space Station last week aboard a Space Exploration Technologies Corp. rocket in the first-ever launch of humans aboard a company spacecraft. Trump made two trips to Florida to observe the launch, which was a major milestone in the NASA-administered Commercial Crew Program that began under the Obama administration.

Musk and SpaceX did not respond to requests for comment on the ad, which also features several of the company’s employees.

The Trump campaign’s attempt to seize on the milestone space launch has been drowned out by coverage of the administration’s handling of the civil unrest that erupted after George Floyd, an unarmed black man, died at the hands of Minneapolis police officers. The video had fewer than 25,000 views on YouTube as of Thursday afternoon.

Trump has vowed to jump-start a new space economy, boost funding to NASA and return to the moon by 2024. The administration formed the U.S. Space Force, the newest branch of the nation’s military, in December.