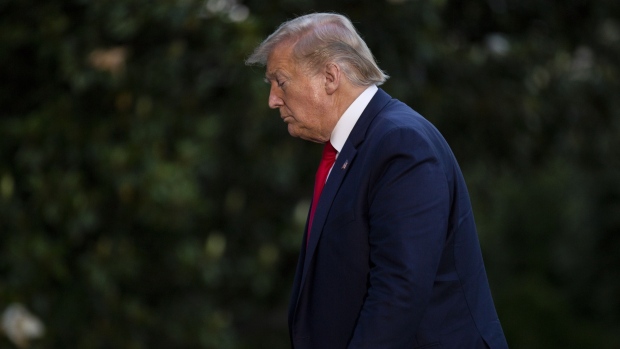 U.S. President Donald Trump walks on the South Lawn of the White House after arriving on Marine One in Washington, D.C., U.S., on Saturday, May 30, 2020. Bloomberg/Stefani Reynolds/Bloomberg

President Donald Trump said he’s planning an expanded Group of Seven leaders meeting in the autumn, potentially even after the November election, postponing efforts to hold the event in June at Camp David.

Trump, speaking to reporters aboard Air Force One, said he’d like to extend an invitation to leaders from Russia, Australia, India and South Korea as well the current participants, calling the setup “outdated” at the moment.

Trump wants to supplement the gathering of traditional G7 allies with those impacted by COVID-19, and also to discuss the future of China, said White House spokeswoman Alyssa Farah, traveling with the president.

China, the world’s No. 2 economy, wasn’t among Trump’s proposed attendees as tensions between Washington and Beijing run high over the coronavirus and Hong Kong.

Instead, Trump would bring in Australia, which has joined with the U.S. in criticizing China about the spread of coronavirus around the world, and has faced economic reprisals as a result.

A move to invite Russia would be controversial. Russia was suspended from what was then the Group of Eight major economies in 2014 after its annexation of Crimea. Trump has mused before about bringing Moscow back into the fold.

Trump said the meeting could be held the weekend before or the weekend after the UN General Assembly, which is scheduled to open — potentially virtually, not in person — on Sept. 15 and run through Sept. 30.

“Maybe I’ll do it after the election,” Trump said. “I think a good time would be before the election.” The U.S. presidential election is Nov. 3.

German Chancellor Angela Merkel indicated this weekend that she was hesitant to travel to the U.S. in June for a physical G-7 meeting, one that Trump saw as a sign of normalization after the coronavirus pandemic shut down major economies.

“She’s unable to confirm her personal participation,” a German government spokesperson said of Merkel in an emailed statement on Saturday.

Trump spoke to U.K. Prime Minister Boris Johnson and French President Emmanuel Macron in recent days about progress on convening the G-7 in person. It’s unclear if either committed to a June gathering or encouraged a postponement.

Current G7 members apart from the U.S., Germany, France and the U.K. are Japan, Canada and Italy.

—With assistance from Virginia Van Natta