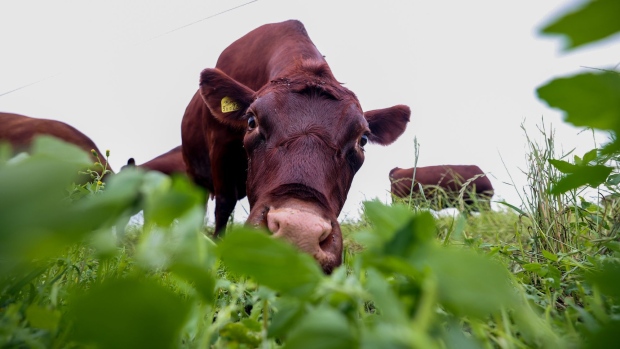 A Red Poll cow grazes on a cattle farm in Fobbing, U.K., on Tuesday, June 22, 2021. The new U.K. and Australia free-trade agreement will reduce levies on agricultural products, a point of controversy that had sparked anger from Britain's farming sector. Photographer: Chris Ratcliffe/Bloomberg , Bloomberg

The U.K. government is portraying itself as a global leader in tackling climate change as it prepares to host the COP26 summit this month.

So guests at a government-organized dinner addressed by Chancellor of the Exchequer Rishi Sunak on Monday night were surprised to be served beef, the most greenhouse gas-intensive popular meat.

About 300 people attended the dinner in London, after Sunak unveiled a green finance strategy and financiers promised to do more to tackle climate change. A vegetarian option was available, but only on a pre-ordered basis, according to one guest.

Related story: The Beef Industry Tries To Erase Its Emissions With Fuzzy Math

The methane produced by cattle is dozens of times more potent than carbon dioxide in warming the planet when measured over 20 years. To limit global warming to the critical 1.5 degrees Celsius level, the United Nations-backed Intergovernmental Panel on Climate Change estimates a global methane reduction of 40% to 45% by 2030 is required.

The Treasury referred questions to the Department for International Trade, which organized the event, and which didn’t immediately respond to a request for comment.