The most accurate currency forecasters see the U.S. dollar weakening this year and the euro benefiting, as the U.S. looks set to outpace Europe in monetary policy easing.

An eventual resolution to the U.S.-China trade spat will also support the common currency’s ascent by four per cent to US$1.17 at the year-end, according to Kyriakos Pavlou, a senior trader at Eurobank Cyprus, which led Bloomberg’s rankings of foreign-exchange predictions in the second quarter. His views were echoed by Rabobank International and Julius Baer, who placed second and third on the list, though they see a slower pace of decline for the greenback.

The forecasters, speaking before Fed Chair Jerome Powell’s dovish views this week hurt the dollar, think a 18-month bullish run in the greenback might be over soon. Both Rabobank and Julius Baer predict the euro will face some near-term pressure before climbing to US$1.15 in 12 months.

“While the dollar will dominate throughout the summer it will lose steam when factors such as Fed easing will start kicking in,” said Pavlou, who is single-handedly responsible for Eurobank’s currency calls. “Come September there will be a switch against the euro especially, which will gain strength from the declining interest-rate differentials as the Fed accelerates their rate cuts.”

The Cyprus-based firm has been in the top 10 most accurate forecasters for the past five quarters, though Pavlou attributes some of the success to “timing and luck.” Looking at technical factors and fundamentals, he said the euro could likely slip to US$1.11 over the next few months on an increasingly dovish ECB, before rebounding into the end of the year. The median forecast in the Bloomberg survey sees US$1.15 by the end of 2019.

A gauge of the dollar saw its first monthly decline in five in June, prompting some of Europe’s largest funds such as Amundi and UBS Global Wealth Management to also predict a further deterioration in the greenback’s outlook. Pacific Investment Management Co. said if the Fed’s cut this month was not a one-and-done the dollar could “really roll over.”

While the ECB is seen tracking the Fed’s accommodative policy stance, it’s the U.S. central bank that will dominate currency markets given it “has the room to loosen which the ECB doesn’t,” said Julius Baer Senior Economist David Alexander Meier, who is part of a forecasting team headed by David Kohl.

“If we see this race to a more dovish stance as kind of a currency war of central banks, then the ECB does not have the same ammunition as the Fed has,” Zurich-based Meier said. “We don’t see too much U.S. dollar upside from here.” 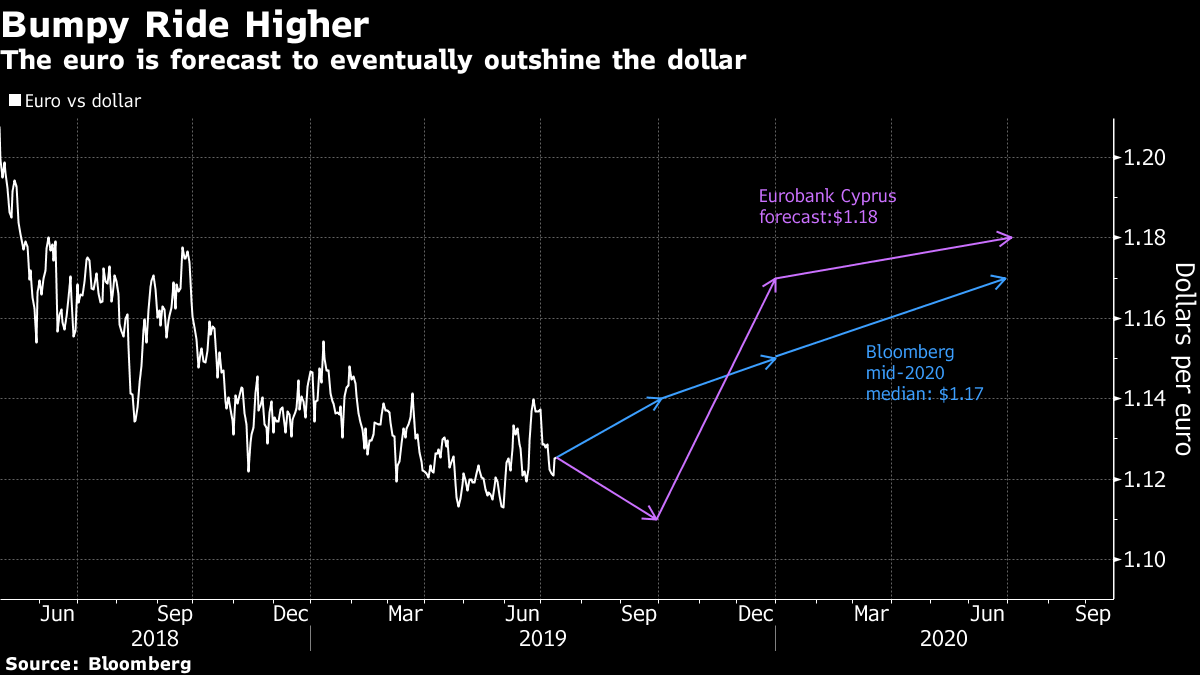 Of the top three, Rabobank’s Jane Foley, a 25-year industry veteran, is the most pessimistic on the euro’s near-term prospects. She sees it dropping to $1.10 in the next three months before recovering to US$1.12 by the end of 2019, as Europe’s economic outlook is still patchy and trade disputes haven’t gone away.

“We do see risk of an escalation,” said Foley, Rabobank’s head of currency strategy. “This is likely to keep investor confidence subdued, which should also be dollar-supportive.”

Eurobank’s Pavlou and Julius Baer’s Meier agree that trade is the wildcard here: if it were to take a turn for the worse, they would have to reconsider their calls as investors would flock to the safety of the dollar.

“If trade wars were to intensify, that would be the worst case scenario for us which will force us to change our outlook,” said Pavlou, who has more than a decade of experience in financial markets. “Even though global central banks might be preparing for the downside risks, I don’t think they will be ready for a full fledged trade war with additional tariffs.”

--With assistance from Wei Lu