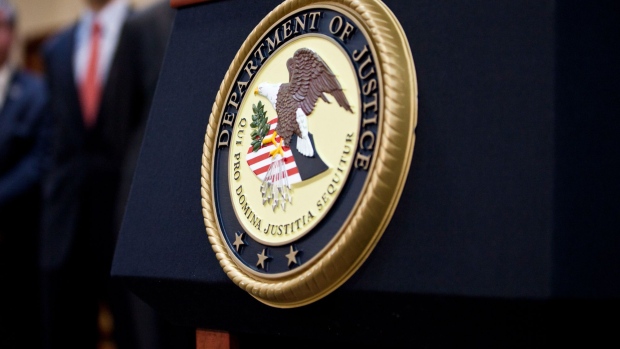 NEW YORK, NY - DECEMBER 11: A US Department of Justice seal is displayed on a podium during a news conference to announce money laundering charges against HSBC on December 11, 2012 in the Brooklyn borough of New York City. HSBC Holdings plc and HSBC USA NA have agreed to pay $1.92 billion and enter into a deferred prosecution agreement with the U.S. Department of Justice in regards to charges involving money laundering with Mexican drug cartels. (Photo by Ramin Talaie/Getty Images) , Getty Images

The U.S. Justice Department intends to work with state attorneys general in a broad review of whether large technology companies are harming competition, the department’s top antitrust official said.

More than a dozen states are interested in the issue and will likely cooperate with the Justice Department, Makan Delrahim, the head of the antitrust division, said Tuesday at a technology conference in Aspen, Colorado.

“We will be taking a broad look, and we look at it with no preconceived agendas,” he said. “I anticipate it would be in cooperative manner,” he added about the state and federal efforts.

The Justice Department in July said it intended to scrutinize the conduct of the largest tech platforms. It didn’t specify which firms it would look at but strongly suggested Facebook Inc. (FB:UN), Alphabet Inc.’s Google (GOOGL:UN) and Amazon.com Inc. (AMZN:UN) are in the cross-hairs, saying it would examine concerns about search, social media and online retail.

A group of state attorneys general is also gearing up to investigate tech companies, Bloomberg reported in June.

“We continue to engage in bipartisan conversations about the unchecked power of large tech companies,” New York Attorney General Letitia James’s office said in a statement. “We must ensure we protect competition, protect our economy, and protect consumers.”

Delrahim said cooperation between the Justice Department and the states would reduce the burden on the companies being investigated. His comments are likely to be welcome news to the tech companies. Separate state and federal investigations could mean multiple requests for documents and depositions as well as multiple penalties.

Companies that are subjects of the Justice Department investigation are cooperating with investigators to provide information, Delrahim said. He said there is no specific time line for the probe.