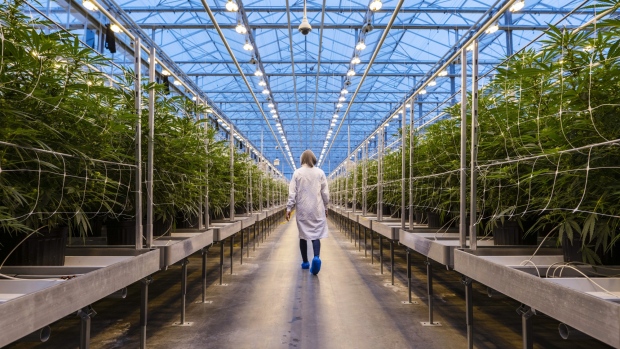 A worker walks past rows of cannabis plants growing in a greenhouse at the Hexo Corp. facility in Gatineau, Quebec, Canada. , Bloomberg

TORONTO -- U.S. cannabis companies raised $1.5 billion on the Canadian Securities Exchange during the first 10 months of this year, surpassing their Canadian counterparts for the first time as investor interest shifts south of the border.

Data from the alternative exchange shows that U.S.-based pot companies raised roughly $1.5 billion between January and October 2018, usurping the $1 billion raised by Canadian-based cannabis issuers during that period.

Investor attention is pivoting towards the cannabis industry in the U.S., where marijuana remains illegal at the federal level but political sentiment is warming up.

"The Canadian side of the business, it's capitalized at this point," CSE chief executive Richard Carleton said.

"There's obviously more work to be done, but the real activity yet to come is obviously in the United States."

Cannabis is legal for medical or recreational use in several U.S. states, but it is considered a Schedule 1 drug federally south of the border. Although Canada is at the forefront and became the second country in the world to legalize pot for adult use on Oct. 17, the U.S. market has far more potential.

Pot companies have flocked to the CSE due to its looser listing rules than the bigger Toronto Stock Exchange, and marijuana listings accounted for 70 per cent of the $3.6 billion in financing activity during the first 10 months of 2018.

The CSE had 212 pot industry financings and $2.5 billion raised in that period, up from 156 deals worth $691 million or 50 per cent of financing deals in all of 2017. Also, for the first time, cannabis issuers from outside of the U.S. and Canada are looking to the CSE, with six listings from Israel thus far in 2018, the exchange says.

The CSE hit a monthly fundraising record last month, led by U.S. medical pot producer and retailer Curaleaf which raised $520 million in a financing via a reverse-takeover. The Massachusetts-based company's deal was the largest completed on the CSE to date, the exchange says.

The alternative exchange has seen more U.S.-based cannabis companies listings in November as well. Green Growth Brands Inc. debuted on the CSE on Tuesday and Acreage Holdings Inc., which includes former prime minister Brian Mulroney on its board, commenced trading on the CSE on Thursday. Dixie Brands Inc., known for its cannabis-infused products, is eyeing a listing on the CSE via reverse-takeover by the end of the month.

"There's expected to be significant consolidation in the United States, mergers and acquisitions," Carleton said. "And clearly having the liquid currency of a public company as one of the tools in your kit is a huge advantage."

Canada's policy on cannabis has allowed domestic pot companies to grow and expand into the global market while the plant's conflicting legal status south of the border keeps U.S. competitors at bay -- for now.

U.S. cannabis companies not able to raise public capital at home because the drug is illegal federally have looked to Canada for financing, and the CSE has been the main beneficiary.

TMX Group, Canada's biggest exchange operator, warned last year that pot companies with ongoing cross-border activities are not in compliance with TSX requirements and face delisting. That cemented the CSE as the go-to exchange for pot companies with U.S. interests as it allows issuers to have exposure, provided they disclose the risks to investors.

Meanwhile, Canadian companies such as Canopy Growth Corp. and Tilray Inc which do not have direct exposure to the American market have been listing on U.S. exchanges. These larger players are also eyeing an entry into the U.S. market once federally legal as the odds of such a policy shift increase. During the U.S. midterm elections earlier this month, Michigan became the latest to approve recreational pot legalization and Utah and Missouri approved the drug for medical purposes.

Two major political opponents to the federal legalization of cannabis in the U.S. were also removed this month. Texas Representative Pete Sessions, a staunch medical marijuana opponent, was defeated and Jeff Sessions has resigned as attorney general at the request of U.S. president Donald Trump.

Legislation that would allow for the full legalization of industrial hemp in the U.S. and ease restrictions on the cannabis compound CBD is also working its way through the U.S. legislative process.

In addition, a bill known as the STATES act amending the Controlled Substances Act which could effectively make marijuana federally legal in states where recreational consumption is legal has been referred to a Senate committee.

U.S. pot companies operating in states where the drug is legal have an edge by being on the ground, but also from more scope to promote brands and develop intellectual property than their Canadian counterparts.

That latitude in the U.S. offers more upside for investors, said Peter Horvath, the chief executive of Green Growth Brands.

"We all have some level of cultivation going on in our businesses, but the real focus is consumers... In Canada, it's pretty much you buy soulless packaged goods only from the government, there's not a lot of opportunity to differentiate."