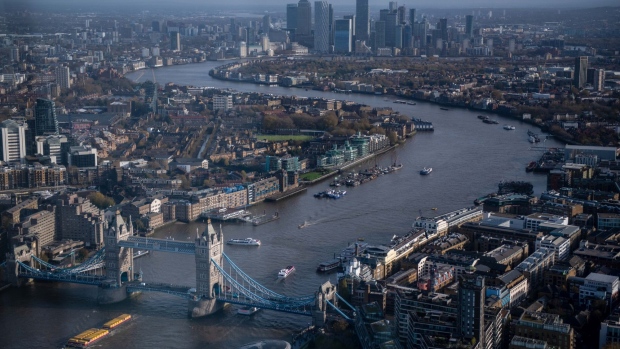 The Canary Wharf business, financial and shopping on the bank of the River Thames beyond Tower Bridge in London, UK, on Saturday, Nov. 26, 2022. A survey of finance workers has found that some employees are ignoring return-to-work mandates, the latest sign of the challenges firms face in encouraging staff back to the office. , Bloomberg

(Bloomberg) -- The UK government will move away from talking about a “Big Bang 2” for the City of London, in part a recognition of the fact that changes will be gradual due to their complexity and opposition from critics.

Ministers are expected to stop using the phrase, a reference to dramatic reforms in the 1980s that made London a global financial center, according to a person familiar with the matter. The shift reflects a wish to build support among a broad range of stakeholders and to position growth in financial services as an opportunity for the wider country.

There has also been a realization that the scope for speedy change is limited, several people involved in the discussions said.

Andrew Griffith, the City Minister, will unveil a relatively muted package of post-Brexit reforms on Friday to boost the UK’s financial services industry. The changes include relaxing ring-fencing capital rules to lighten the burden on smaller banks.

Jeremy Hunt, the chancellor, is also due to meet finance executives in Edinburgh to discuss opportunities for the sector.

The government’s plans may include reversing the EU MiFID II ban on banks bundling the costs of company research with other fees, deregulation of trading rules to boost flexibility for investors and a watering down responsibilities for senior managers and firms over consumer protections, according to people who have been involved in the discussions.

They also said there may be a reference to corporate governance reforms to enhance London’s attractiveness for listings and investment by trying to improve relations between companies and their shareholders, reducing the influence of proxy voting agencies, and liberalizing guidance on non-executive pay.

It’s a far-cry from the far-reaching changes mooted when Liz Truss was prime minister. Most of the reforms from that helter-skelter period have been shelved.

Griffith told an event at the Conservative Party conference this Autumn that he believes the principle of caveat emptor — buyer beware — should be restored in financial services to reduce the burden on firms and to encourage innovation.

He also argued in a speech last week that there should be more “appropriate risk-taking” to generate opportunities and has written to UK regulators calling for greater transparency on their “operational effectiveness.”

However, the minister has run into opposition over his reforms, which he has been consulting on for weeks. He climbed down on a new intervention power over regulators after a high-profile campaign against it by the Bank of England.

“There must be no race to the bottom on financial stability regulation and consumer protection,” Labour’s shadow city minister Tulip Siddiq said in a statement. “The global competitiveness of the UK’s financial services sector depends on our strong regulatory standards.”

Crypto reforms could be another flash point as there are concerns among MPs and consumer groups about the risk of more people losing money if they believe the sector is fully regulated, according to two of the people.

The Treasury Select Committee is holding an inquiry into crypto assets. “As crypto becomes more widespread there will be increasing concern about financial stability and consumer protection that will be difficult to ignore,” said Anthony Browne, a Conservative lawmaker on the committee.

As the UK played a leading role in designing much of the EU’s financial services regulations, there are only limited areas to be changed, many in the City have argued.

There is skepticism among some at the Financial Conduct Authority and Treasury that deregulating rules on analyst research fees will have the desired outcome of boosting reports written on smaller companies and so stir interest among investors, according to the people close to the discussions.

There is also a view inside big banks that the consumer duty, now in place, should not be dismantled, they said. Some of the ambivalence among finance executives toward Griffith’s ideas is because they think they might be abandoned if the Labour Party wins the next general election.

Griffith is also constrained by a wish to avoid further conflict with regulators, some officials inside the Treasury and critics within the Conservative Party, according to two of the people.

“We are committed to delivering ambitious reform of the UK financial services sector,” a Treasury spokesperson said.

--With assistance from Alex Wickham.