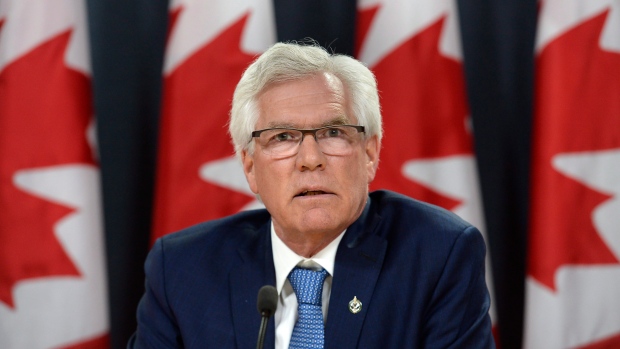 Minister of Natural Resources Jim Carr speaks during a press conference in response to newly-levied U.S. tariffs on Canadian softwood lumber, in Ottawa on Tuesday, April 25, 2017. , THE CANADIAN PRESS/Adrian Wyld

OTTAWA -- The federal government is reaching out to reassure forestry workers, lumber producers and others facing the impact from a fresh sofwood trade war that it stands ready to help cushion what it suggests will be a heavy blow.

The U.S. is imposing significant duties of up to 24 per cent on lumber imports — the latest flare-up in Canada's escalating trade skirmish with President Donald Trump's administration.

Natural Resources Minister Jim Carr acknowledged Tuesday that job losses are likely in the offing, saying Employment and Social Development Canada is standing by to provide essential services for anyone who is impacted.

"If we look at the history of these trade actions, there inevitably will be job losses," Carr told a news conference in Ottawa. 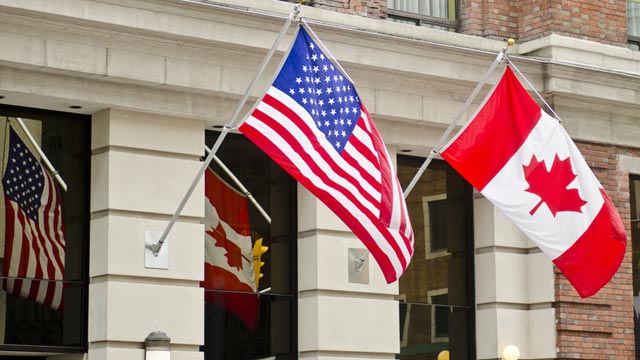 "We will focus our efforts on doing whatever we can to ease the impact of those job losses; that is the reality of this countervail. It is going to result in some tough times for some operators across the country.

"We are prepared and well-positioned to do whatever governments can reasonably do to help the workers, the industries and the communities that will be affected."

Available ESDC supports include employment insurance, career counselling, retraining and provincial skills development programs, said Carr, noting Canada is no stranger to softwood disputes with the U.S., and has always prevailed in the past.

NDP Leader Tom Mulcair, who held a news conference immediately following Carr and Revenue Minister Diane Lebouthillier, was incredulous that the federal government had nothing significant on offer for those who will feel the impact.

"We don't seem to have a plan," Mulcair said.

"When you're dealing with a bully, at some point you have to stop backing up. That's all (Prime Minister Justin) Trudeau seems to be able to do."

Trudeau, meanwhile, says the Canada-U.S. relationship is bigger than any one trade irritant — and that both countries would suffer from a "thickening" border.

"We are tremendously interconnected in our economy with that of the United States, but it's not just a one-way relationship," Trudeau said during a visit to Kitchener, Ont.

"There are millions of good U.S. jobs that depend on smooth flow of goods, services and people back and forth across our border."

He cited the North American auto sector as one compelling example, and his oft-repeated illustration of how a typical car part can cross the border up to six times before it ends up in a finished automobile.

Trudeau also said the friendly nature of the relationship means both sides will be able to work through any disputes that arise, such as those currently brewing on softwood lumber and dairy products.

Carr, on the other hand, wasn't sounding an especially friendly tone.

"We will continue to press our American counterparts to rescind this unfair and unwarranted trade action," he said.

"We remain confident that a negotiated settlement is not only possible but in the interests of both countries."

During a technical briefing on the softwood duties Tuesday, officials said Canada is not likely to challenge legally under the North American Free Trade Agreement or with the World Trade Organization until next year.

They need to wait until the final determinations, which likely won't happen until late 2017, officials say, which means a legal challenge wouldn't come before January 2018.

U.S. President Donald Trump has been stirring the pot of late, tweeting today that Canada is making life "very difficult" for American dairy farmers and that the government "will not stand" for it.

Lumber and dairy are long-standing irritants — and were also a problem file under previous presidents. In softwood lumber, the countries have a once-a-decade cycle of tariffs, trade litigation, and ultimately settlements.

U.S. Secretary of Commerce Wilbur Ross spoke to the White House media on Tuesday, criticizing some of Canada's trade practices.

"If NAFTA were functioning properly, you wouldn't be having these kinds of ... very unfortunate developments back-to-back, so in that sense it shows that NAFTA has not worked as well as it should." he told the assembled press.

However, later in the same briefing, he stated that he did not foresee any trade actions against Canada in the near future.

“As far as I know, there’s nothing immediate being contemplated.”

“We look forward to constructive discussions with the Canadians as we get into NAFTA,” Ross added.

Thanks to free trade, there is also a shortage of red tape and regulation that "blocks and gums up the system," Trudeau added.

"You cannot thicken this border without hurting people on both sides of it," he said.

"Any two countries are going to have issues that will be irritants to the relationship. Having a good constructive working relationship allows us to work through those irritants.

"There's always going to be political pressures to raise this issue or that issue ... but the core of this relationship is bigger than any two individuals sitting in the top of their respective governments."

Trudeau warned against paying too much heed to "those narrow interests that always want to close off or impose barriers."

The softwood spat is unfolding amid a much bigger trade issue — the renegotiation of the North American Free Trade Agreement. Despite remarks from the president and his cabinet secretary, neither lumber nor dairy are actually part of the current NAFTA. However, different actors would be pleased to add provisions on one or the other.

What comes next on softwood is a study of separate anti-dumping duties, followed by a final verdict by the U.S. Commerce Department as early as Sept. 7, and then one of three possible outcomes: a negotiated agreement, a surprise retreat from the U.S. government, or a potential years-long court battle.

Canada's government condemned the announcement. In a statement, the federal government called the move unfair, baseless, unfounded and it promised help for its industry.

Carr said the action hurts people in both countries — not only Canada's lumber sector that employs hundreds of thousands, but also American homebuyers, who must now pay more for wood.