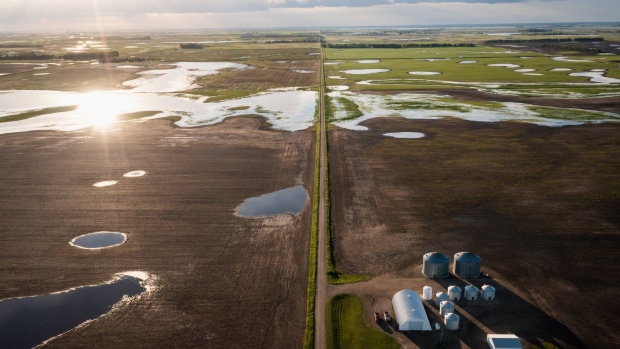 A flooded field of corn crops on a farm in North Dakota. Photographer: Ben Brewer/Bloomberg , Bloomberg

(Bloomberg) -- Global grain markets are at a pivot point, with prices finally starting to ease after a dizzying surge earlier this year. Where things go from here could end up being determined by farmers like Justin Sherlock and the extreme weather that’s hitting parts of the US crop belt.

For Sherlock, like most of America’s farmers, crazy weather isn’t anything new. His North Dakota farm gets so much excess water every spring that the area his farm is in has been dubbed the Prairie Potholes for the puddles that form in the middle of fields. But this year has been exceptional. The deluge was so intense floodwaters submerged acre after acre.

Forget puddles. This spring, the rains were so hard it was more like his farm got dotted with miniature lakes.

“It’s been a struggle,” said Sherlock, who got about 75% of his planned corn and soybean crops into the ground before relentless rainfall forced him to call it quits in mid-June. “It's been such a long, kind of horrible spring, that I'll do what I can to grow the best crop I can this year, but I basically already decided to put my hopes on 2023.”

In any normal crop year, flooding on a field like Sherlock’s might not matter that much in the bigger picture of the global agriculture market. After all, North Dakota is a smaller player when it comes to corn, and powerhouses like Iowa and Illinois saw better conditions for spring planting. But as everyone knows, 2022 is anything but a typical year.

Russia’s invasion of Ukraine has stifled exports from a region that’s known as the world’s breadbasket. The disruption has sent crop futures to near-record highs, with stockpiles extremely tight. That’s adding to rampant food inflation and raising fears of global grain shortages. Markets have finally started to calm in recent weeks on optimism that key producers like Australia and the US will reap harvests large enough to help replenish war-pinched reserves.

“US production will play an important role this year in stabilizing markets and any ‘bad news’ will push prices up on world markets,” said David Laborde of the International Food Policy Research Institute in Washington.

North Dakota, which provides crucial export supplies for terminals along the West Coast, is the epicenter of US planting woes. But in the heart of the Midwest corn country, many farmers also faced delays. For weeks, government data showed national seeding progress was trailing historical averages.

Some farmers, like Sherlock, simply had to stop planting, with the goal of obtaining “prevent plant” crop insurance compensation. Others shifted from corn to soybeans, which can be sown later in the season. For the crops that did get seeded, the spring delays can continue to cause problems as the growing season continues. Yield potential generally declines if plantings occur outside the ideal window.

On top of all that, there’s also concern over drought this summer for parts of Iowa and Illinois, a US government outlook shows. That could further endanger yields as climate change makes extreme weather events more likely to occur and more severe.

Already, scorching heat in parts of the Midwest means farmers may have “lost the top end of the yields and productivity,” said Mark Licht, a professor at Iowa State University.

The market will get a fresh update on acreage Thursday, when the US Department of Agriculture releases its planting survey results along with its quarterly estimates for grain stockpiles.

Despite this year’s surge in prices, which some hoped would lure farmers to increase acres, analysts are expecting the USDA report will show little deviation from growers’ original intentions after the field delays.

Corn planting is seen at 89.8 million acres, according to the average estimate from analysts surveyed by Bloomberg. That compares with 89.5 million from the USDA’s March prospective plantings survey.

In Chicago trading, December corn futures, which help set prices for this season’s crop, are up about 20% this year, even after the market eased over the last month. November soybean futures are up about 15%.

Those gains could mean that the USDA surprises traders with a plantings figure that’s bigger than expected. That would be a welcome development for consumers, since bigger harvests would help to quell US food inflation that’s running at the highest in decades.

Matt Bennett and his partners at commodities brokerage AgMarket.net expect a “slight increase” in both corn and soybean acres. Even if plantings are higher, Bennett warns not to forget about drought potential in some areas that could dent national production.

“There’s a ton of concern right now that you might be the farmer that doesn’t catch the rain this year because there’s so much money invested in these crops,” Bennett said.

Back in North Dakota, Sherlock was forced to sow around the massive pools that submerged big swaths of his fields. Rains continued to slow fieldwork through mid-June, and ultimately, he decided not to plant on about a 30% of his 2,500-acres near the town of Dazey, including one-quarter of his intended corn and soybeans and all of his planned acres of barley.

“I'm not expecting an even average yield at this point,” he said. “I'm expecting below average, unless we get a miracle of a summer with perfect temperatures and perfect rains.”