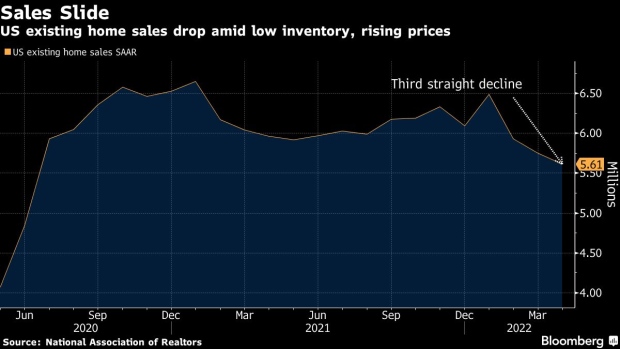 (Bloomberg) -- Sales of previously owned US homes fell in April to the lowest since June 2020, held back by lean inventory, as well as rising prices and mortgage rates.

Contract closings decreased 2.4% in April from the prior month to an annualized 5.61 million, figures from the National Association of Realtors showed Thursday. The median forecast in a Bloomberg survey of economists called for 5.64 million.

The data suggest that rising home prices and limited inventory, combined with a steep surge in borrowing costs, are weighing on purchases, which fell for a third month. The 30-year mortgage rate rose to 5.5% last week, up from 3.5% at the beginning of the year, according to data from the Mortgage Bankers Association.

“Higher home prices and sharply higher mortgage rates have reduced buyer activity,” Lawrence Yun, NAR’s chief economist, said in a statement. “It looks like more declines are imminent in the upcoming months, and we’ll likely return to the pre-pandemic home sales activity after the remarkable surge over the past two years.”

The number of homes for sale climbed from March but was down 10.4% from a year ago. At the current pace it would take 2.2 months to sell all the homes on the market. Realtors see anything below five months of supply as a sign of a tight market.

The median selling price rose 14.8% from a year earlier, to a record $391,200 in April, led by gains in the South. First-time buyers accounted for 28% of US sales last month, down from 30% in March, and underscoring the affordability challenges that have been pricing many Americans out of the market.

Sales have generally been rising at the higher end of prices and falling for less expensive homes, reflecting lower inventory for cheaper houses.

Cash sales represented 26% of all transactions in April, down slightly from the prior month but still elevated. Investors, who typically buy in cash and are therefore less sensitive to mortgage rates, made up 17% of the market.