Coronavirus could have bigger market impact than SARS

The outbreak of the deadly coronavirus threatens to derail a fragile stabilization in the world economy, which had appeared poised to benefit from the phase one U.S.-China trade deal, and signs of a tech turnaround.

While it’s too early to assess the full impact on China, where national holidays have been extended and the central city of Wuhan has been locked down, it’s already clear the virus is hurting consumption and tourism.

Industrial production will also be impacted just as factories would normally be getting back into full swing following the Lunar New Year holidays, as will private investment. That’ll dent economies reliant on Chinese demand, with Bloomberg Economics saying Asian neighbors and commodity exporters face the biggest hit.

Global companies including Honda Motor Co. and Nissan Motor Co. are among those evacuating workers from the affected area, while theme park operators, movie theaters, retailers and restaurant chains are suspending or curtailing operations to protect workers.

“The Wuhan coronavirus poses a significant downside risk to the near-term Asia-Pacific economic outlook in 2020 if the epidemic continues to escalate in coming weeks,” Rajiv Biswas, Asia Pacific Chief Economist at IHS Markit, wrote in a recent report to clients. “The extent and duration of this negative shock to regional economic growth will depend on how quickly the Wuhan virus epidemic can be brought under control.”

Wuhan is taking the biggest economic hit. The city of 11 million has been locked down in a bid to stem the spread of the virus, leaving roads empty and millions of people isolated and idle.

The US$214 billion economy makes up about 1.6 per cent of national GDP. It’s a vital logistics, auto and steel manufacturing hub in the center of China, magnifying the impact of disruptions to travel and production there.

As well as the quarantine of Wuhan and other parts of Hubei province, China has extended the current holiday by a few days and other provinces such as Shanghai have asked businesses to delay reopening for another week. That extended shutdown will affect the incomes of Chinese companies, hurt consumption and also reduce industrial output and exports, at least temporarily.

Economists are still running the numbers on what that will likely lop off GDP growth. Recent reports from UBS Group AG, Nomura Holdings Inc. and Barclays Bank Plc. reached back to the 2003 SARS outbreak for guidance on the potential impact. 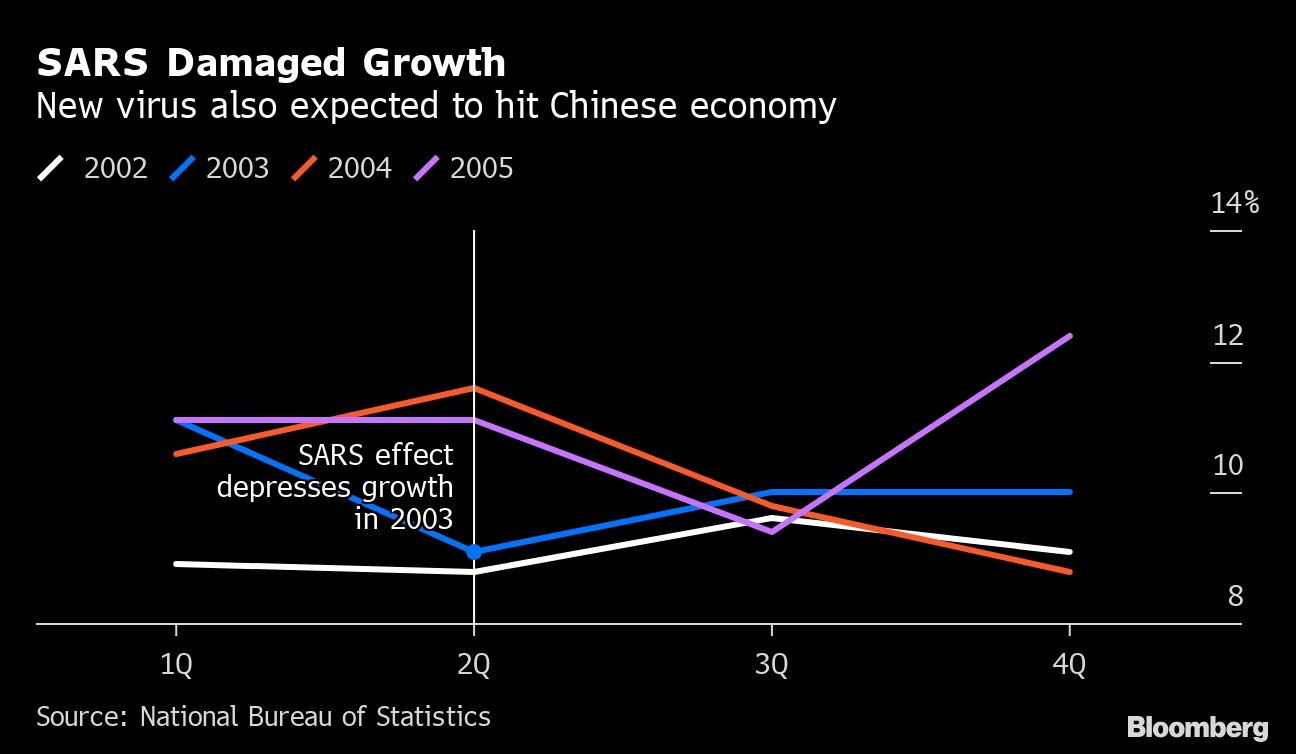 Barclays estimated that consumer confidence and spending activity would be impacted, and take a transitory 0.1 to 0.2 percentage point off GDP growth in the first or second quarter. China-wide, if spending on things including discretionary transport and entertainment dropped by 10 per cent, overall GDP growth would fall by about 1.2 percentage points, according to “back of the envelope” estimates from S&P‘s Roache.

Bloomberg Economics argues that the changing composition of China’s economy today compared with during the 2002-03 SARS outbreak could magnify the impact, both at home and globally.

“A larger role for consumption, tourism, and other leisure activities, massive increase in travel, and potential for panicked markets to deal a blow to sentiment, mean the risks are larger,” Chief Economist Tom Orlik wrote.

Still, there’s always a chance that economies could recover quickly too.

“Asia has room for monetary and fiscal policy responses, and these virus shocks tends to be short-lived and cause a V-shaped trajectory in economic activity, as there is a lot of pent-up activity once the virus peaks,” said Rob Subbaraman, head of global macro research at Nomura Holdings Inc. in Singapore.

The economic effects will be felt in other countries. China has canceled overseas package tours and the delay in resuming business after the holidays is set to affect import demand. Hong Kong, Thailand, Vietnam, Singapore and Philippines are most at risk given the reliance on Chinese visitors and high share of tourism in their GDP.

“We certainly expect there to be an impact on our economy, business and consumer confidence this year, especially as the situation is expected to persist for some time,” Singapore’s Trade Minister Chan Chun Sing said on Monday. “Of immediate concern will be the tourism related sectors.”

In Japan — which hosts the Olympic Games mid year— Finance Minister Taro Aso on Tuesday warned that tourism will be affected.

Australia’s tourism and consumption industries, already reeling from wildfires that drove overseas visitors to cancel trips, are set for a follow-up hit from the virus.

Financial market sentiment is already being hit. Risk aversion and tighter financial conditions could amplify the impact of the outbreak.

Asian stocks retreated again on Tuesday after the S&P 500 Index fell the most in almost four months. Chipmakers, cruise lines and casino operators sold off in the U.S. on Monday. Hong Kong markets are scheduled to reopen Wednesday, while the latest guidance from China’s markets is for a reopening next Monday.

“The fear factor has been high and could continue to drive down the market,” JP Morgan Chase & Co. economists Joyce Chang and Zhu Haibin wrote in a report, adding that markets tend to bottom when new cases peak.

Earlier this month, the International Monetary Fund had predicted the world economy would strengthen in 2020, albeit at a slightly weaker pace than previously anticipated, with support coming from a pick up in manufacturing, trade and signs of a revival in the electronics industry. 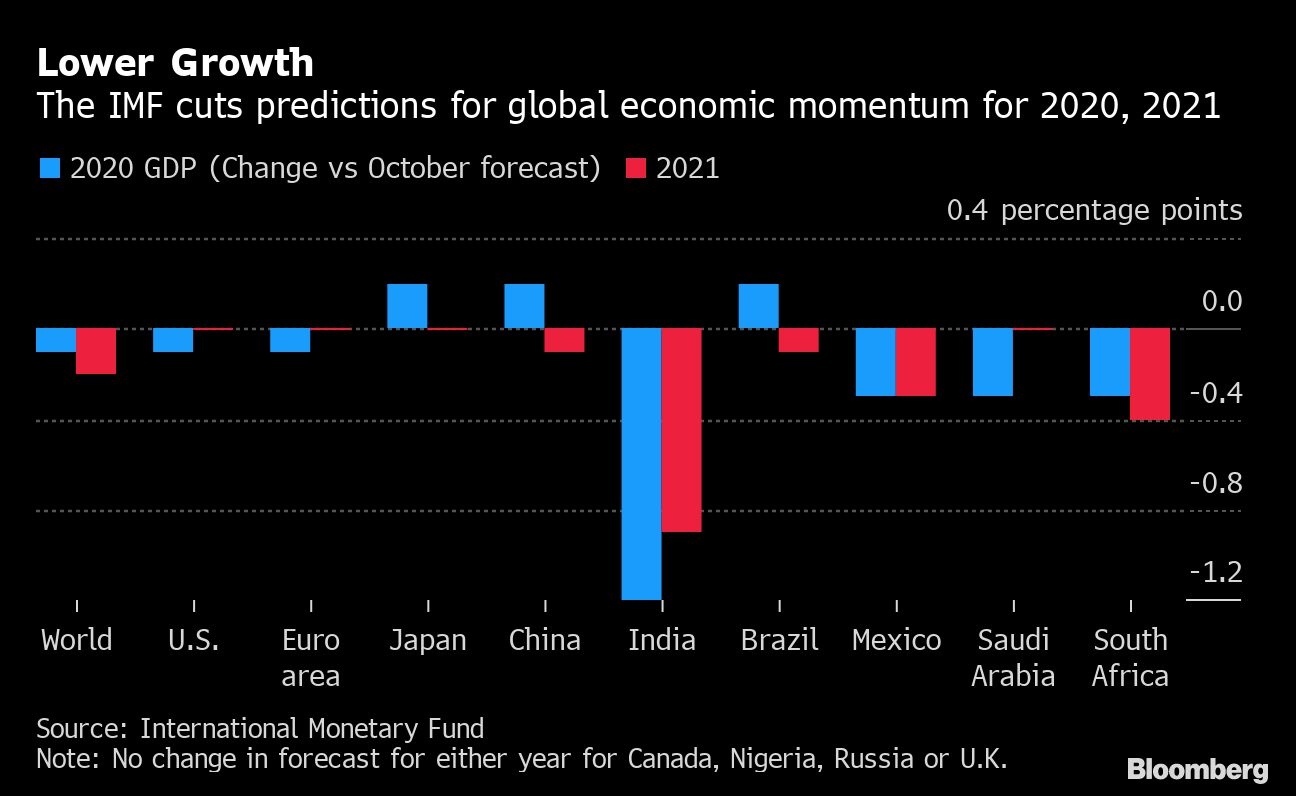 Whether that happens now hinges, at least partly, on the severity of the outbreak, how long it lasts, and how effective governments are in rolling out stimulus to offset the hit to growth.