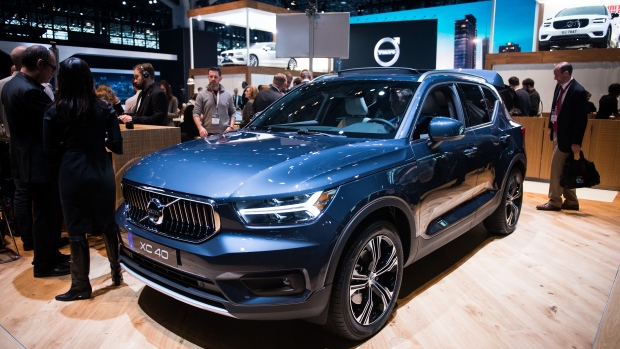 Volvo Cars isn’t just electrifying its lineup to cut carbon emissions. Now the Swedish automaker says it will pay customers to make sure they plug in.

Volvo is tying the launch of its first all-electric vehicle -- the XC40 crossover -- to a broader plan for shrinking the carbon footprint of its models by 40 per cent through 2025. And it’s backing that pledge with a promise to pay the first year’s worth of charging costs for owners of its plug-in hybrids, starting with the 2021 model year.

Volvo placed itself at the forefront of electric car hype in 2017 when it vowed to rid its lineup of cars running purely on fossil fuels by 2025. To get there, it’s going to roll out a new battery-electric model every year until 2025, starting with its XC SUVs, Chief Executive Officer Hakan Samuelsson said. Those will join a growing range of hybrid models.

“We believe we should treat sustainability as as much of an integrated part of our business as safety, not just something we do as an add-on,” Samuelsson said in a phone interview. “We’re making it part of our product offering.”

Buyers of 2021 model year hybrids will be able to claim a refund for their electricity costs during the first year of ownership based on power consumption data extracted from Volvo’s app for Apple and Android smartphones.

Samuelsson said Volvo will start producing its first EV late next year and price it to compete with Tesla Inc.’s Model 3, which starts at about US$39,000 but has been selling on average for roughly US$50,000. Like Volvo’s hybrids, the all-electric XC40 will be branded under the “Recharge” sub-brand name.

The electric XC40 will join a wave of new EVs debuting to keep up with tightening emissions regulations in China and Europe. While uptake remains slow, carmakers including Volkswagen AG and Daimler AG have launched new models like the Audi e-tron and Mercedes EQC to chase after Tesla.

Volvo is pushing ahead with its electric ambitions as others in the space struggle. NIO Inc., China’s would-be Tesla competitor, is running short of cash. Jia Yueting, founder of electric vehicle start-up Faraday & Future Inc., filed for bankruptcy. And Dyson Ltd., the famed maker of vacuum cleaners, pulled the plug on its battery-powered car project.

Volvo would not be making a fully electric XC40 if it wasn’t “absolutely sure” the car will be profitable, Samuelsson said.

The bet on electrics comes at a time when the carmaker is coping with a global sales slowdown and tariffs that led to a 30 per cent drop in first-half operating income. To cut costs, the company plans to merge engine operations with Chinese parent Geely.

Samuelsson said Volvo wants to increase the appeal of electrified vehicles so they sell without government subsidies -- and incentives like free charging for the first year. “Long term, if this is really going to do something to the climate or the environment, the cars need to be attractive and need to be bought by customers with their own money,” he said.