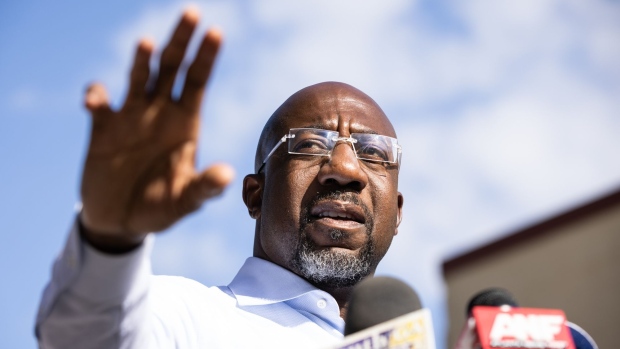 Senator Raphael Warnock, a Democrat from Georgia, speaks during an election day campaign event in Atlanta, Georgia, US, on Tuesday, Nov. 8, 2022. After months of talk about reproductive rights, threats to democracy, climate change, immigration and crime, the US midterm elections are coming down to the way Americans feel about the overall state of the economy and, in particular, inflation. , Bloomberg

(Bloomberg) -- A victory by Democratic Senator Raphael Warnock in next week’s Georgia runoff election would hand his party a crucial 51st seat and some concrete advantages over Republicans.

While Democrats already retained the barest of Senate majorities for next year by winning 50 seats in the midterm elections, their control in an evenly divided chamber depends on Vice President Kamala Harris to break ties. A re-election win by Warnock over Republican challenger Herschel Walker on Dec. 6 would guarantee a one-seat edge on committees and provide a much-needed cushion should a single Democrat like conservative Joe Manchin vote with the GOP opposing a nomination from President Joe Biden.

It’s the second time in two years that Georgia has been the center of attention, following 2021 run-off victories by Warner and fellow Democrat Jon Ossoff. A Walker win would leave the Senate at 50-50, but give the GOP a head start on 2024, when Democrats will be defending more seats, including in Republican strongholds like Montana and West Virginia.

Here are the three key ways that the balance of power tilts even further away from Republicans if Warnock pulls it off again:

The 50-50 Senate is currently managed by a power-sharing agreement between Senate Majority Leader Chuck Schumer and Minority Leader Mitch McConnell. That’s been used only once before: for the five months in 2001 that the Senate was evenly split.

The Schumer-McConnell accord, negotiated over weeks of tense talks, gave each party an equal number of seats on every Senate committee. The biggest impact was on Biden’s nominees. Any time a committee deadlocks on legislation or a confirmation, either leader can seek to have the full Senate vote by a simple majority to bring the bill or nominee to the floor. Schumer has forced those votes more that two dozen times, mostly on controversial executive and judicial branch nominations.

If Warnock wins, Democrats would get a one-seat majority on all committees and more budget for their staff. On a handful of committees that require a majority vote in order to issue subpoenas -- including the Intelligence, Armed Services and Foreign Relations panels -- Democrats would be able to act without GOP consent.

Biden recently said firmer committee control is the main benefit of having 51 seats in Democratic hands. “The bigger the numbers, the better.”

Democrats hold control of the 50-50 chamber by virtue of Harris’s tie-breaking vote in her capacity as president of the Senate. That’s kept her in Washington frequently. In this session of Congress, Harris has cast the decisive vote more than two dozen times, including to confirm Lisa Cook to the Federal Reserve Board of Governors and to advance to a final vote on Rohit Chopra’s nomination to lead the Consumer Financial Protection Bureau.

An extra seat means she would only seldom need to come to Capitol Hill to break a tie.

That would have the biggest impact on confirmations, which need just a simple majority of 51 votes. More of Biden’s picks for agencies and judgeships would move through with greater ease, with Harris needed only if one Democrat defects and votes with Republicans if they’re united against someone.

West Virginia Democrat Manchin used his vote in the 50-50 Senate to shape Biden’s economic agenda to his liking. He also thwarted Biden’s nominations of Sarah Bloom Raskin to be the Federal Reserve’s vice chair of supervision and Neera Tanden to lead the Office of Management and Budget by siding with Republicans in opposition.

If Warnock keeps the Georgia seat, there is a little more wiggle room for Biden’s picks, because no single Democrat could defeat a nominee in instances where GOP support is lacking. Warnock has been a reliable vote on Biden’s nominees, and he likely would be joined next year by Democrat John Fetterman, a progressive who won the Pennsylvania seat vacated by retiring GOP Senator Pat Toomey.

Manchin, who likely will face a tough reelection campaign in 2024, also loses some influence with Republicans taking over the House. Democrats used a special budget rule known as reconciliation to move Biden’s scaled back agenda with a simple majority vote, a powerful tool. But they won’t be able to do that without a Democratic controlled House, so legislation will need 60 votes to bypass a filibuster. With that, Manchin becomes one of the Senate’s cluster of moderates whose votes might be in play instead of a power center of his own.