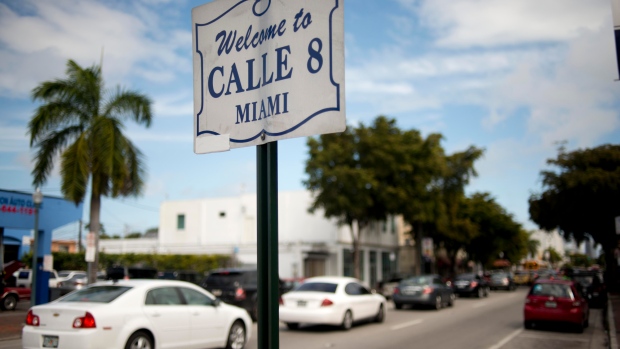 Cars pass by a sign welcoming people to Calle 8, or Eighth Street, in the Little Havana district of Miami, Florida, Feb. 20, 2013 , Bloomberg/Ty Wright

This is the second instalment of BNN Bloomberg's five-part series on odd jobs and the Canadians who work them.

Many snowbirds prefer to fly when making the journey south to warmer climates. But as they take to the sky, they have to find a way to get around on the ground when they land.

There are about 500,000 Canadians who own a vacation property in the U.S., most of whom are in Florida followed by Arizona and then California, according to Stephen Fine, president and managing editor of the website Snow Bird Advisor. This sizeable market — combined with many snowbirds’ desire to drive their own vehicles at their destinations, without making the hours-long road journey themselves — presented an opportunity for one savvy businessperson.

Karen Smythe started Snowbird Car Transport 15 years ago to supplement her income from working in marketing and sales. Now in her fifties, Smythe runs the business full time and employs contract drivers.

Smythe is one of many Canadians who have made the leap into unconventional careers in Canada as self-employment in the country continues to grow. According to the latest Statistics Canada data, the number of self-employed Canadians increased by 48,100, or 1.7 per cent, in December from a year earlier.

Below, in the second Q&A of BNN Bloomberg’s series examining some of Canada’s odd jobs, Smythe discusses the perks of the job, how she keeps herself entertained during the long journey, and her close encounter with the bovine kind.

Q: How did the idea for the business come about?

A: I started driving for three of my neighbours in my forties for some extra spending money, and I enjoyed the time on the road so much I started advertising and driving twice a week in the fall and winter. Eventually I had to hire drivers for the extra clients.

Q: How does the service work?

A: Clients call us and we find out what vehicle they own, the pickup city and the drop-off city, and whether they need items driven in the vehicles. We then collect their vehicle registrations and insurance.

Q: Do you ever drive cars back from the U.S. to Toronto, or do you offer only the one-way service?

A: Yes, we will drive cars back to Toronto at the same rate of pay. You would be amazed however at how unpopular that particular service is. Most people like to drive their cars home for some reason.

A: From October to December, we easily drive more than 100 cars and trucks to Florida and other southern states. But I will service year-round. Mostly in the summer, our clients want their cars driven to Calgary or Vancouver, which we also do.

Q: How many times in a year do you personally do the driving?

A: I usually limit my drives to Florida to once a month. But so far this winter has been my busiest and I had to drive three cars down.

Q: How long does the drive usually take?

A: From Toronto to Tampa, the most common route, about 22 hours of road time.

Q: What’s the most rewarding part of the job?

A: Getting paid to drive to my favourite beaches!

Q: What’s a surprising aspect of your job that others may not know about?

A: I have listened to more than 1,000 audio books since I started this company. Most average six hours, and that’s all I listen to on my trips.

Q: Anything eventful ever happen while on the road?

A: October 2016 in Lexington, Kentucky, a truck full of cows tipped over and the cows were walking and running through town. The police had a tough time getting traffic out of the downtown core. I just gave up trying to get back on the road, parked the car behind a tavern and watched the show from the patio!

Q: What’s a big lesson you’ve learned from doing this line of work?

A: Do not drive through Cincinnati on any game day, use the bypass every time. Make sure you know when all pro-sports events are taking place all the way down, and that includes Atlanta on Hawks’ game days.

This interview has been edited and condensed for clarity.