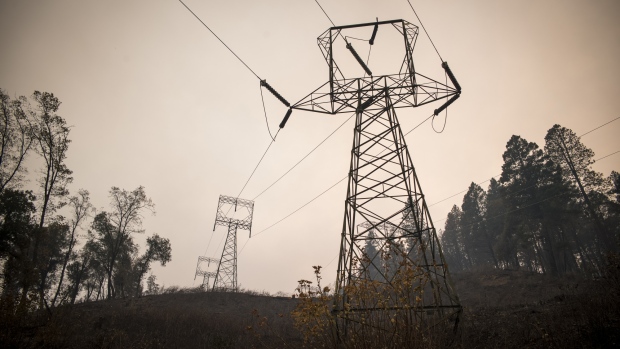 (Bloomberg) -- PG&E Corp.’s statement last week that the deadly Camp Fire will likely be blamed on the company’s equipment is adding fuel to a perennial California debate: Should power lines be placed underground?

Overhead cables whipping about in wind storms have for years sparked massive fires in the state, whereas even the most powerful gale can’t touch lines buried in the earth. If Europe can place many of its electrical lines underground, the argument goes, why can’t California?

Underground lines cost more to install than overhead wires pretty much everywhere. A 2012 study by the Edison Electric Institute found that the cost of replacing existing overhead distribution lines with underground ones in suburban America ranged from $313,600 per mile to $2.4 million. In cities, it ranged from $1 million to $5 million.

Mark McGranaghan, with the Electric Power Research Institute, said the cost per mile is roughly 30 percent to 40 percent lower in Europe. While utilities there typically place insulated power lines directly in a dirt trench, U.S. utilities prefer a more costly method, placing them inside ducts, sometimes protected by concrete. That makes them easier to maintain and repair, and shields them from someone accidentally digging into them.

Then there’s population density. European cities and towns tend to have more people packed into each square mile than American communities. So the per-customer cost looks more palatable, said McGranaghan, the institute’s vice president of distribution and energy utilization.

“It’s a difference of design philosophy, and the fact that you have more customers taking advantage of the service,” he said.

The result: 41 percent of European power lines between 1 kilovolt and 100 kilovolts lie underground, according to the Europacable industry group. In PG&E’s territory, which includes many sparsely populated rural areas, only 18 percent of distribution lines are underground.

The cause of the Camp Fire -- which killed 85 and ranks as California’s deadliest -- remains under investigation. But last week, PG&E reported that the company "believes it is probable that the Utility’s equipment will be determined to be an ignition point," of the fire, which started under a PG&E transmission line during a windstorm.

To contact the editors responsible for this story: Lynn Doan at ldoan6@bloomberg.net, Reg Gale, Jeffrey Taylor