Giant Manufacturing Co. saw the writing on the wall early on. The world’s biggest bicycle maker started moving production of U.S.-bound orders out of its China facilities to its home base in Taiwan as soon as it heard Donald Trump threaten tariff action in September.

“When Trump announced the plan of 25 per cent tariffs, we took it seriously,” Chairwoman Bonnie Tu said in an interview at Giant’s Taichung City headquarters in Taiwan. “We started moving before he shut his mouth.”

Giant is part of a growing number of global firms that are pivoting production out of China in reaction to the increasingly hostile trade relations between the two superpowers. Intel Corp. this week became the latest to say it’s reviewing its global supply chain, while Li & Fung Ltd., the world’s largest supplier of consumer goods, said the trade war is spurring it to diversify away from China.

“Last year, I noticed that the era of Made In China and supplying globally is over,” Tu said. The maker of mountain and racing bicycles closed one plant in China at the end of 2018 and shifted most U.S. orders out of the country. Giant announced last July it is setting up a factory in Hungary “as moving production close to your market is a trend.” 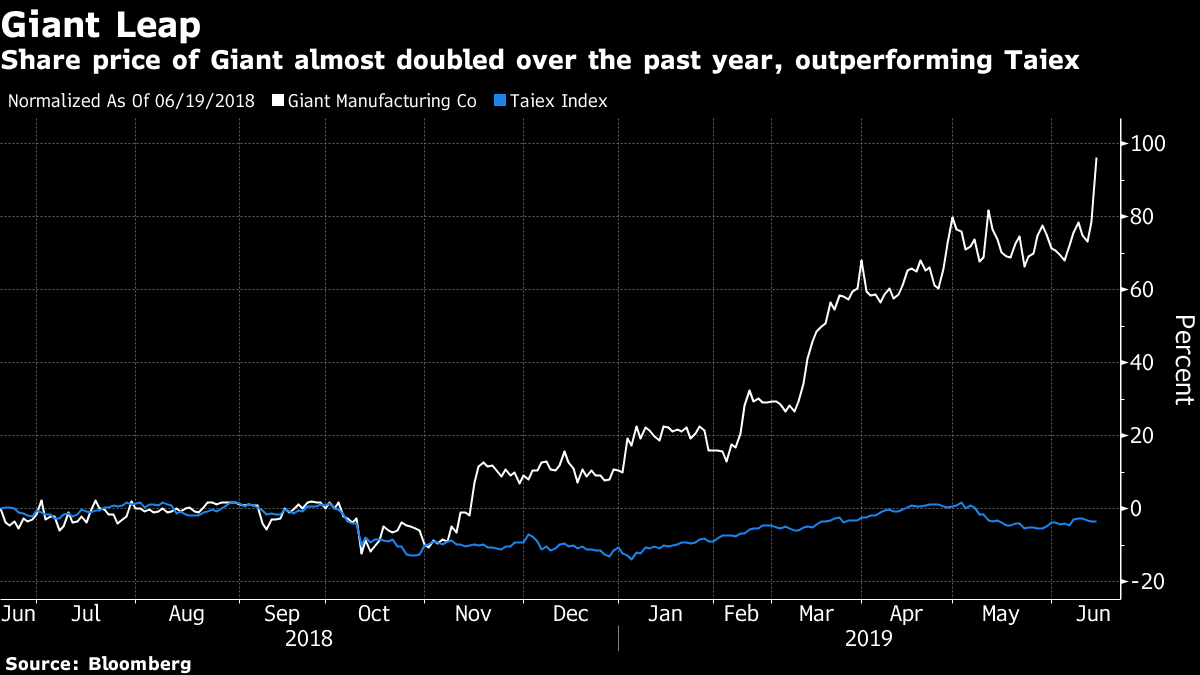 Giant currently has one plant each in Taiwan and the Netherlands, and still has five remaining in China. The Taiwanese site will be working double shifts to keep up with the relocated orders. The company said it is seeking a partner in Southeast Asia.

“The world is no longer flat,” said Tu, borrowing from Thomas Friedman’s book “The World Is Flat,” whose title in a metaphor for viewing the world as a level playing field for companies and trade. “The concept is no longer affordable in every place.”

Giant’s willingness to quickly steer orders away from the tariff-hit Asian nation -- long regarded as the world’s low-cost workshop -- has been noticed by investors and analysts. The stock, which doesn’t carry a single sell rating from brokerages tracked by Bloomberg, has climbed 78 per cent this year to become the top-performing company among global peers, after four straight years of decline.

“We see its global brand awareness as the main barrier for new entrants, and its flexible manufacturing sites as key to avoiding tariff risk on made-in-China products from the U.S. and Europe,” Daiwa analysts Helen Chien and Anita Li wrote in a June 5 report, in which they initiated coverage of Giant with an outperform rating.

Tariffs are adding US$100 on average to the price of bicycles made in China and exported to the U.S., compared with those made in zero-tariff areas, Tu said, explaining the rationale for the switch to the Taiwanese site.

The switch, however, comes with higher costs for employee payouts, automation and no China-like economy of scale for suppliers. Tu declined to peg the relocation costs beyond saying the company’s “bottom line would be better without the U.S.-China trade war.”

That’s why Giant is open to reverting production to its Chinese plants if the U.S. and China are able to hammer out a trade deal. If America “decides to remove the 25 per cent tariff, we will move the production back to China right away,” Tu said.