U.S. Treasury Secretary Janet Yellen and Federal Reserve Chair Jerome Powell appear wary of signs of froth in financial markets, even as they press ahead with economic stimulus measures that are elevating the euphoria.

There “may be sectors where we should be very careful,” Yellen told CNBC television last week, when asked about possible speculative sizzle.

The remarks came a day after publication of minutes of the Fed’s Jan. 26-27 policy meeting at which staff characterized the risks to financial stability as notable – an assessment Powell shares, according to a central bank official familiar with the matter. 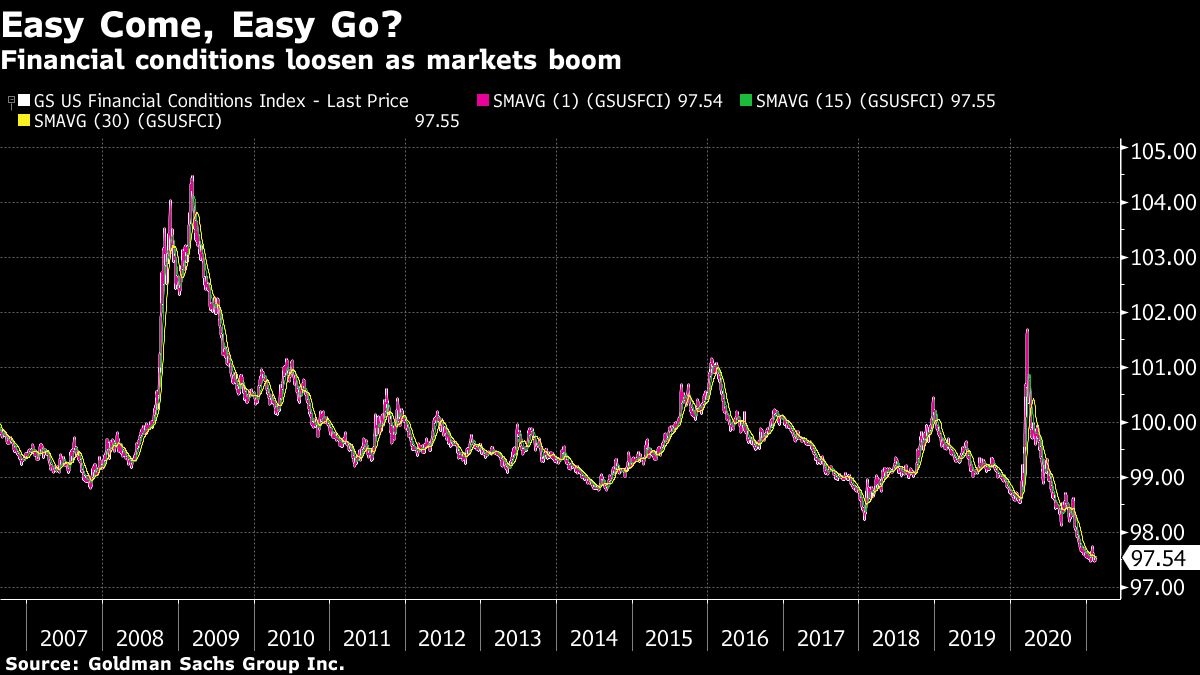 The policy makers face a difficult dilemma. While they recognize that ultra-lax economic policies can fuel financial excesses, they believe the pandemic-damanged economy is in a deep hole and in need of substantial help.

Both have recently suggested that the true unemployment rate is close to 10 per cent, after taking account of those who have dropped out of the workforce or are involuntarily working part-time, compared with the official figure of 6.3 per cent.

Compounding their quandary: The U.S. has fewer regulatory tools to head off asset bubbles and excessive leverage than many other countries.

Yellen spoke out in favor of President Joe Biden’s US$1.9 trillion fiscal aid package again on Monday, telling a New York Times webinar that the spending was needed to prevent long-term scarring of the economy from the pandemic. Powell, for his part, is expected to reaffirm his commitment to an ultra-easy monetary policy when he testifies to the Senate Banking Committee on Tuesday.

While stock prices pulled back on Monday as yields on Treasury securities rose, the S&P 500 index is still trading near a record high, up some 75 per cent from lows struck last March. Yields on the riskiest corporate bonds fell below 4 per cent for the time ever earlier this month. And even after a big decline on Monday, cryptocurrency Bitcoin is still up significantly this year.

Asset prices could get a further boost if Congress passes Biden’s aid plan, which includes US$1,400 in stimulus checks for many Americans, said former Congressional Budget Office Director Douglas Holtz-Eakin, who is now president of the American Action Forum in Washington.

“With investors betting on persistent policy backstop, a sense of complacency appears to be permeating markets,” was how International Monetary Fund officials Tobias Adrian and Fabio Natalucci described the situation in a Jan. 27 blogpost.

They warned of a rising risk of an economically destabilizing nose-dive in financial markets, perhaps in reaction to a persistent increase in long-term interest rates.

Such a rise may already be in train. The yield on the 10-year Treasury note was trading around 1.35 per cent on Monday in New York from 1.07 per cent at the start of the month, on expectations of higher inflation and a stronger economy. Bloomberg Economics last week boosted its 2021 growth forecast to 4.6 per cent from 3.5 per cent and said that could rise toward 6 per cent to 7 per cent if Biden’s stimulus package is enacted.

Powell in the past has flagged the dangers that excessively elevated asset prices and other financial vulnerabilities can pose to the economy.

In 2007, it was the bursting of a housing market bubble that drove the economy into what then was the deepest downturn since the Great Depression. In 2001, it was a collapse in technology stock prices that helped lead to a recession, although it was a mild one by historic standards.

Yellen told the New York Times webinar that big banks are in much better shape now than they were during the financial crisis more than a dozen years ago -- a point that Powell has also repeatedly made.

The two policy makers have also argued that recent lofty asset prices are at least partially justified by the continued low level of interest rates.

While that’s undoubtedly true, cheap credit can also induce investors to take on more leverage and more risk to boost their returns, pushing prices up to eventually unsustainable levels.

“That’s what makes it hard to tell what’s an asset bubble and what’s fundamental because they’re both pointing in the same direction,” said former Fed Vice Chairman Alan Blinder.

When she headed the central bank, Yellen maintained that the first line of defense against financial stability risks should be tighter regulation, through the use of so-called macro-prudential tools, rather than through increased borrowing costs and higher interest rates.

That’s precisely the prescription espoused by IMF officials Adrian and Natalucci. They argue that now is not the time for policy makers to pull back on support for economies still struggling with Covid-19. Rather, officials should aim to safeguard financial stability via increased supervision and regulation of banks and other financial institutions.

The trouble, said Princeton University professor Blinder, is that the Fed doesn’t have much in the way of macro-prudential tools to help bring that out. Unlike the Bank of England, for instance, it can’t order banks to require home buyers to put more money down as collateral when taking out mortgage loans if it’s worried about a bubble developing in the housing market.

Powell has recently tried to make a virtue out of that deficiency. He’s argued that policy makers often get the timing of such restrictions wrong. And he’s talked up the U.S. template of strict supervision throughout the economic cycle as a viable alternative.

As Treasury secretary and thus head of the government-wide Financial Stability Oversight Council, Yellen will have an opportunity to build up U.S. defenses against excessive financial speculation and leverage.

In that capacity, “I would encourage her to think about where there are holes” in the financial system, former White House chief economist Glenn Hubbard told a Tax Policy Center webinar on Feb. 18.

“I don’t see a crisis around the corner,” the Columbia University professor added. But “if you keep interest rates very low for a long period of time you need to watch out for froth.”