A key part of Canada’s yield curve is now at the steepest inversion since the early 1990s, a possible warning sign for the economy.

The yield on Canada’s benchmark 2-year debt reached 100 basis points above 10-year bonds on Monday. It’s the largest gap since the early 1990s, just as the country’s economy was plunging into a deep downturn. The two-year yield was just below 3.8 per cent at 8:13 a.m. Toronto time. 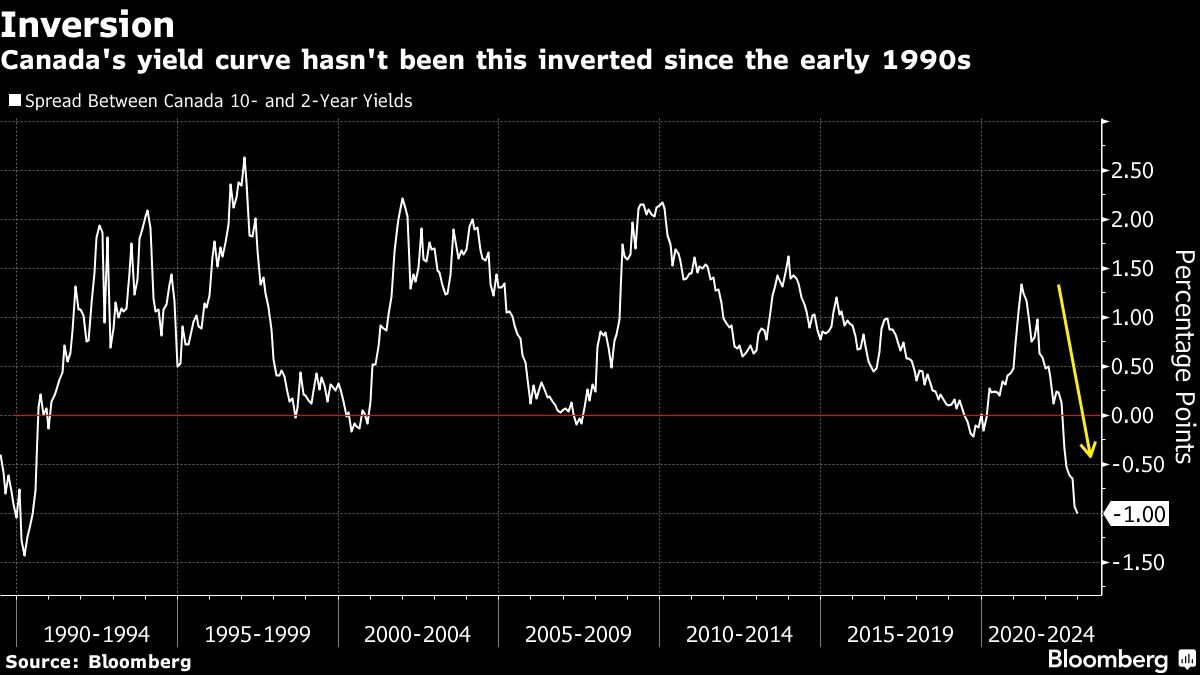 “The inversion is telling us that current policy rates and their near-term expectations are entirely unsustainable over the long run,” Taylor Schleich, a strategist at National Bank of Canada, said by email. He sees the situation persisting at least until investors see an endpoint for the Bank of Canada’s rate hikes.

While most economists don’t see a major downturn ahead in Canada, growth is expected to stall in 2023, with the economy potentially entering a technical recession.

Markets expect the central bank to raise its benchmark overnight lending rate to least 4.25 per cent next year. It’s possible it could reach that level this week, with Governor Tiff Macklem and his officials due to make their final rate decision of the year on Dec. 7.

The current overnight rate is 3.75 per cent, and economists are split on whether the Bank of Canada will increase it by 25 or 50 basis points on Wednesday.

“If we do have further deterioration in economic conditions, leading to more than a shallow recession, then the inversion could get worse -- but this is not our base-case scenario,” Sebastien Mc Mahon, chief strategist and senior economist at Industrial Alliance Investment Management Inc., said by email.

“I would be surprised if we deteriorated to 200 bps like in the early ’80s,” he said by email.