Adidas AG fell the most in four months as investors looked past a modest increase in profit guidance and focused instead on weaker demand in China and factory shutdowns in Vietnam.

While revenue in Europe and North America almost doubled in the second quarter, boosted by the phasing out of pandemic restrictions and a return of major sporting events, sales fell 16 per cent in greater China, where some consumers have boycotted Western brands for taking a stance against forced labor in the Xinjiang region.

Chief Executive Officer Kasper Rorsted told reporters that demand in China steadily recovered in the second quarter, and that the company still expects “strong growth” in the country this year.

The German company is also grappling with supply-side headaches in Asia, where surging COVID cases caused the shuttering of factories in southern Vietnam. The sneaker-maker sourced nearly a third of its products there in 2020. Coupled with a 22 per cent drop in inventories, analysts are concerned the production hiccups will impede growth.

“The return of sports should continue to buoy sportswear, but Adidas’ ability to meet higher demand remains a concern.”

Goyal pointed to the company’s high sourcing exposure to regions experiencing shutdowns, such as Vietnam. She also said the 7 per cent sales growth expected in the second half pales in comparison to the 40 per cent achieved in the first.

Adidas dropped as much as 5.6 per cent, the most since March, after reaching a record high on Wednesday. The stock is still up about 8.2 per cent this year. 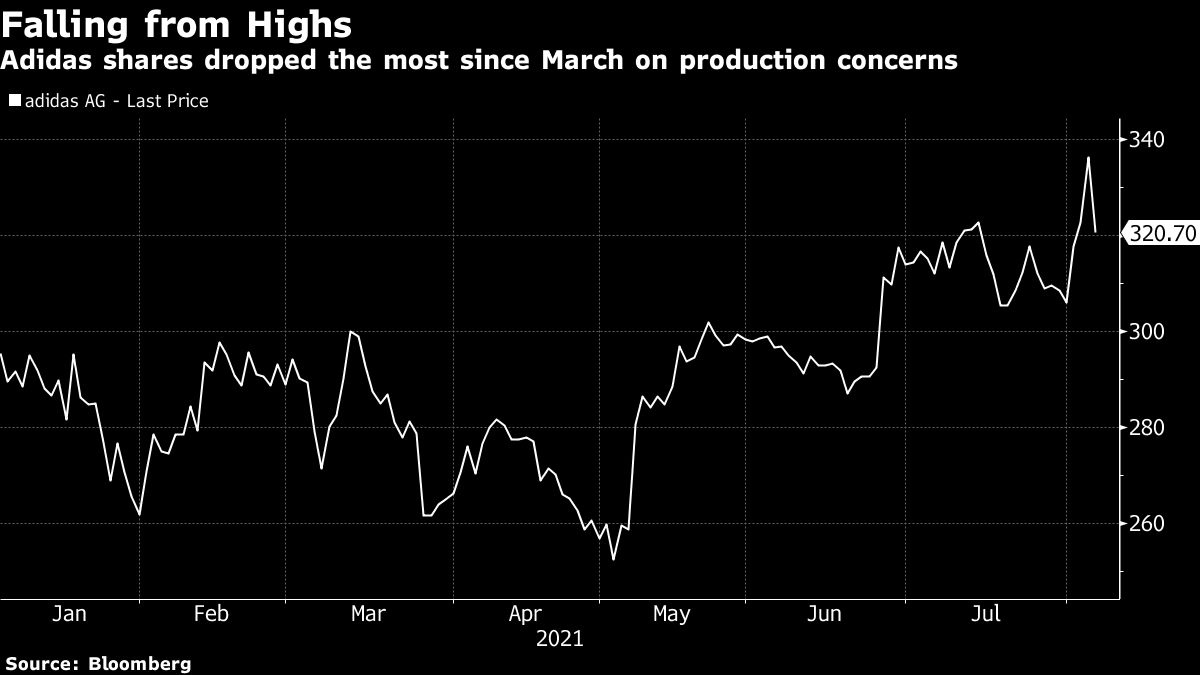 The factory closures in southern Vietnam started on July 12, with the government there recently extending the lockdown measures through Aug. 15. Adidas is trying to limit the fallout by turning to air freight and finding excess production capacity elsewhere.

Nonetheless, there will be a “significant impact” in the second half of the year, including for catering to holiday season shopping, Chief Financial Officer Harm Ohlmeyer said on a call with reporters. Adidas is already accounting for that in its guidance, Ohleyer said.

Based on the government’s latest guidance, Adidas is expecting to ramp up production in the second half of August and return to full capacity by the end of September, Ohlmeyer said.

“Our supply chain works in a way where it takes about three to four months before it has an impact, so you should not expect an impact in the third quarter and of course we’re trying to mitigate the fourth quarter,” CEO Rorsted said on the call.

Still, booming demand in the second quarter prompted Adidas to raise its full-year profit forecast. The company now sees net income from continuing operations of between 1.4 billion euros and 1.5 billion euros (US$1.78 billion), up from a prior forecast of 1.25 billion to 1.45 billion euros.