IEA exec: Canada is right to put a cap on oil sands emissions

Shale explorers extended their retreat into a 10th week, dropping the number of oil rigs at work in the U.S. to the lowest since 2009 as some struggle to stay afloat.

The number of rigs drilling for oil in the country fell by 21 to 237 this week, according to Baker Hughes Co. data released Friday. The count has plunged from 683 in mid-March.

In the Permian Basin of West Texas and New Mexico, 13 were idled, leaving 162 active rigs in the world’s biggest shale patch. 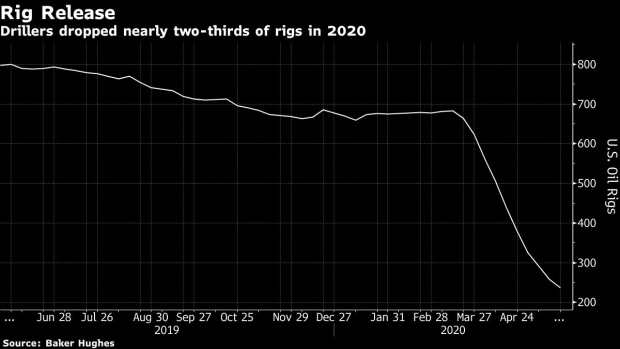 Although oil has rebounded above US$30 a barrel this week, prices are still not high enough for most producers to make a profit. Futures are down by nearly half since the start of the year after worldwide lockdowns to slow the spread of the coronovirus sent demand for fuel plunging.

Crude production in the U.S. dropped to 11.5 million barrels a day last week, from a record level of 13.1 in March, according to government data.

The number of wells being completed by hydraulic fracturing crews is the lowest since Primary Vision Inc. began keeping records in 2014.

The shale patch has seen nearly 90,000 jobs lost over March and April, according to the consultancy BW Research Partnership. That’s almost half the number of jobs lost during the last crude crash of 2014 to 2016, which saw the worst workforce shrinkage in a generation globally, according to Bernstein.