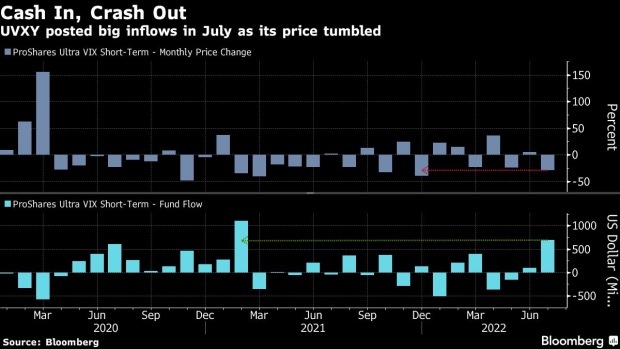 (Bloomberg) -- It doesn’t pay to hedge this bear market.

Investors piled into an exchange-traded fund designed to protect them from market turbulence after the worst start to a year in history, but that protection is turning out to be costly.

Traders lost $392 million on the largest long-volatility ETF in July that profits when volatility surges, according to data complied by Bloomberg. With 2022’s orderly bear market skirting the wild swings that characterized previous downturns, the CBOE Volatility Index, or VIX, has been surprisingly calm.

The $1.4 billion ProShares Ultra VIX Short-Term Futures ETF (ticker UVXY), which is 1.5 times leveraged, was making amped-up bets on volatility as the VIX tumbled 7 points in July to its lowest since April.

“The recession risks are now very well-known and the market is positioned for them through various structures, most of which entail being long volatility in some way,” said Peter Chatwell, head of global macro strategies trading at Mizuho International Plc. “Naturally volatility can only go so high before retreating, and the move into a lower volatility regime is where we are now which is causing a short squeeze.”

Putting money on an instrument tracking equity volatility in US stocks has been a bad bet all year. Partly because of the market’s erratic path, and partly because of the leverage it employs, the UVXY fund is showing a loss for the year so far, in addition to for July. The most recent came as the fund collected its biggest monthly inflow since February 2021.

It’s not just passive investors that have been caught in mistimed bets. Large speculators boosted their net short S&P 500 positions to the highest since June 2020 while open interest on the VIX shows the biggest preponderance of bearish bets since February 2020. And only 26% of large-cap managers beat their benchmarks in July.

The VVIX Index -- which measures the implied volatility in options on the volatility index -- is hovering below 90 and recently reached its lowest since 2019 -- signaling an extended downturn for the so-called fear gauge. And Goldman Sachs Group Inc. strategists expect volatility in equity markets to remain contained even if the US economy slips into a recession.

Yet as July’s market recovery turns fragile, hedges that have lost money may eventually pay off, according to Chatwell. “Come September, the positions which have been squeezed out may well prove to be the right positions,” he said.

August and September are traditionally the most volatile months, and this year is shaping up to be no exception, as a slew of risks heightens moves already exaggerated by thin summer trading.

Already this week the VIX has bounced off Friday’s three-month low of 21 as US tensions with China flare over US House Speaker Nancy Pelosi’s visit to Taiwan while concerns mount over the health of the global economy.

Leveraged long volatility bets can offer big payoffs when the VIX spikes -- UVXY jumped 155% in March 2020 -- but holding those positions through relatively low volatility periods erodes gains by the roll-down effects of the options.

Similar to tail-risk hedges, investors in the ETF often endure losses for long stretches before reaping big gains in a volatility spike. July’s loss stands out, though, as the biggest of any month this year.

“You really have to be tactical with these products and put them on only when you have high conviction that volatility is about to pop,” said Anand Omprakash, head of derivatives and quantitative strategy at Elevation Securities. “If VIX remains low, they will continue to lose money.”