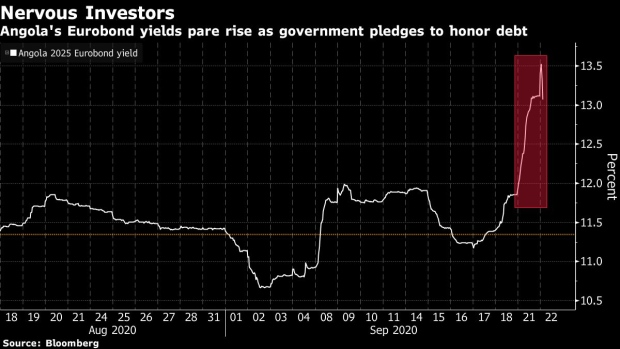 (Bloomberg) -- Angola’s Eurobonds erased declines that drove benchmark yields to three-month highs after the country said it will honor payments on these obligations while it looks for relief from other creditors.

“We will always pay,” Osvaldo Joao, the state secretary for finance, said in an interview Monday in the capital, Luanda. “We haven’t missed paying wages, we haven’t missed honoring debt service, so that tells us that everything is still going alright.” While the country is seeking to renegotiate oil-backed loans, reprofiling the Eurobonds would “strangulate” the country’s relationship with international banks, he said.

The government of Africa’s second-biggest oil exporter is trying to tackle its debt load as crude prices hurt revenue and are set to cause a fourth straight year of economic contraction. Talks so far have yielded about $6 billion in deferred payments from 2020 to 2023, Joao said.

Yields on Angola’s 2025 Eurobonds dropped six basis points to 13.2% as of 10:14 a.m. in London on Tuesday, after climbing as much as 42 basis points to 13.68%. The yield jumped 125 basis points on Monday after the International Monetary Fund said the country’s debt-relief talks with one of its creditors didn’t go as planned, and that the nation may have to seek a wider restructuring if the oil price slumps again.

Debt-service payments from that creditor will likely be delayed until the end of December under the Debt-Service Suspension Initiative backed by the Group of 20 leading economies, the IMF said in a report earlier, without identifying the lenders.

Servicing this “will be challenging for Angola and is likely to be a test case for negotiations on more substantial reprofiling of private-sector debt to DSSI-eligible countries,” Bohlund said in a note. “Bank lending should be easier to reprofile than bond borrowing, and part of this lending is likely to be covered by export credit guarantees.”

China and Chinese commercial lenders accounted for 45% of Angola’s external debt, or $22.4 billion at the end of last year, according to data from the central bank. Talks on renegotiating commercial debt started long before the Covid-19 pandemic and are well-advanced, Joao said. there are also negotiations on the bilateral debt under the G-20’s DSSI, he said.

The Angolan government estimates debt will increase to 123% of gross domestic product by the end of the year from 113% in 2019 because of changes in oil prices and currency weakness, Joao said.

In August, lawmakers approved financial sustainability legislation that requires the government to cut back public debt to 60% of GDP and the non-oil fiscal deficit to 5% or lower over the next five years.

“We’re pursuing a debt stock that is compatible with an Angola without oil,” which will make for a more robust economy less exposed to shocks from the oil sector, Joao said. Oil dependence “makes our economy more vulnerable.”