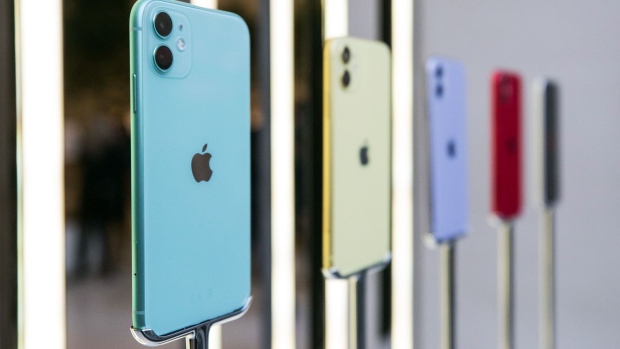 Apple Inc.’s planned stock split in the wake of the surge in its shares and strong earnings is stirring more bets on the company, according to TD Ameritrade Holding Corp.

Activity in the world’s largest technology company “sticks out” over the past week, a repeat of the pattern seen in previous years when Apple split its stock, Christopher Brankin, chief executive officer of brokerage TD Ameritrade Asia Pte in Singapore, said in an interview Tuesday.

“It’s something that we’re seeing across our options here because of that announcement,” he said, referring to the use of derivatives to bet on more gains in Apple shares.

The iPhone maker’s quarterly report last week crushed Wall Street expectations amid pandemic demand for its products, and the company announced a four-for-one split for later this month to make its stock more accessible. The stock rose more than 17 per cent over the previous five straight days, though it was down 0.2 per cent to US$437.60 as of 9:45 a.m. in New York Wednesday.

Signals from the options market are flashing enthusiasm for Apple shares, such as unusually high relative prices for upside bets, according to RBC Capital Markets strategist Amy Wu Silverman.

Apple options are pricing in more upside risk versus downside than at any time this year, despite the stock having almost doubled from its mid-March lows, Chris Murphy, derivatives strategist at Susquehanna Financial Group LLLP, wrote in a note Monday. Smaller traders have been a big portion of such bets in recent months, according to Sundial Capital Research Inc.

That’s part of a wider fervor for the stay-at-home trade favoring some technology stocks. More than 82,000 users of the U.S. investing app Robinhood.com added Apple to their accounts in some form over the past week, according to website Robintrack.net, which aggregates data from the brokerage but isn’t affiliated with it.