Apple Inc. became the world’s most valuable company with its market value overtaking Saudi Aramco in the wake of better-than-expected earnings.

Apple jumped 10 per cent on Friday, ending the day with a record market capitalization of US$1.817 trillion. It’s the first time the company’s valuation has surpassed that of Saudi Arabia’s national oil company, which made its market debut in Riyadh in December, and is valued at US$1.76 trillion. Before that, Apple had vied with Microsoft Corp. for the title of the U.S.’s largest public company.

The dethroning of Aramco comes after a tumultuous period for the Saudi company. Its initial public offering fell short of Crown Price Mohammed bin Salman’s expectations. The kingdom’s de facto ruler initially wanted a valuation of US$2 trillion and to raise US$100 billion. But after foreign investors balked at the pricing, the government settled on a smaller domestic offering and raised about US$30 billion, still the largest IPO ever. 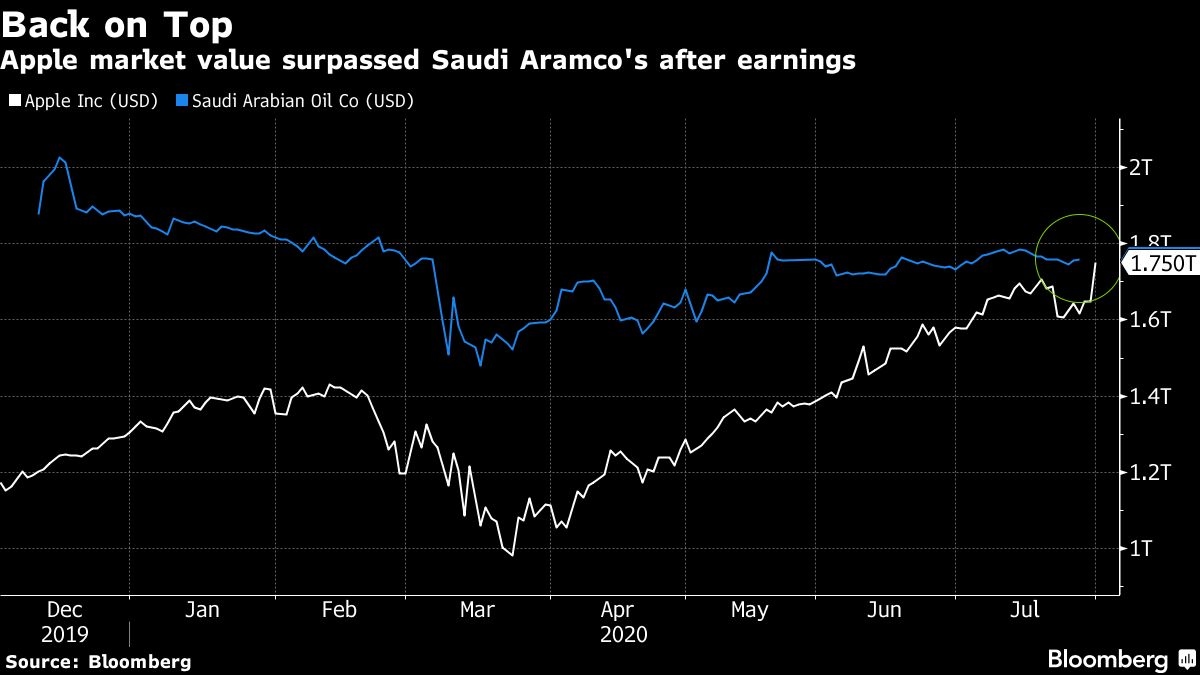 Then came this year’s plunge in crude prices as energy demand crashed with the spread of the virus. Aramco’s second-quarter revenue probably dropped to about US$37 billion from US$76 billion a year earlier, according to analyst estimates compiled by Bloomberg. That’s less than the US$59.7 billion in sales that Apple reported for its most recent period.

Aramco’s stock is down 6.4 per cent since the end of December, though that’s far less than the fall of other oil majors. Exxon Mobil Corp. has declined 40 per cent and Royal Dutch Shell Plc has dropped 50 per cent.

Apple, meanwhile, has benefited as the pandemic has strengthened the market positions of the world’s biggest technology companies, which boast strong balance sheets and fast-growing businesses thanks to an acceleration in the shift to digital services. The iPhone maker’s shares have gained 45 per cent so far this year.