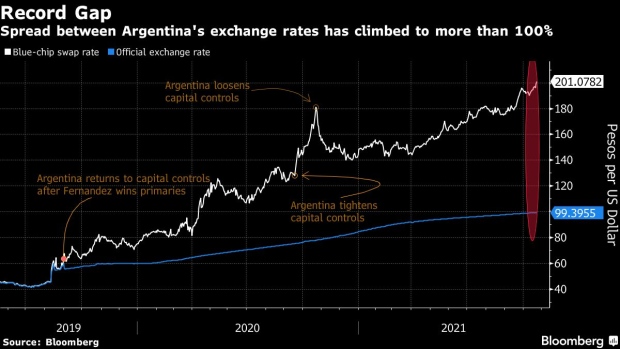 (Bloomberg) -- Argentina’s parallel exchange rate weakened past a key threshold on Friday, as demand for assets in hard currency climbs ahead of the country’s midterm elections in November.

The blue-chip swap exchange rate, derived from buying shares locally and then selling them abroad for dollars, weakened to 201.6/USD at 1:42 p.m. in Buenos Aires. The spread between the official peso and the blue-chip rose to 102.3%, up from 100.5% yesterday, its widest in at least a year.

Argentine investors have grown increasingly pessimistic on the peso, betting that the government will be forced to speed up devaluation after November elections. President Alberto Fernandez’s administration has insisted on a slow depreciation of the official exchange rate, keeping the currency overvalued via strict capital controls as it tries to tamp down on inflation running at more than 50% annually.

The government says it will continue implementing the currency policy laid out in the 2021 budget, and that a sudden jump in the exchange rate isn’t forecasted or planned, Economy Minister Martin Guzman said on Thursday.