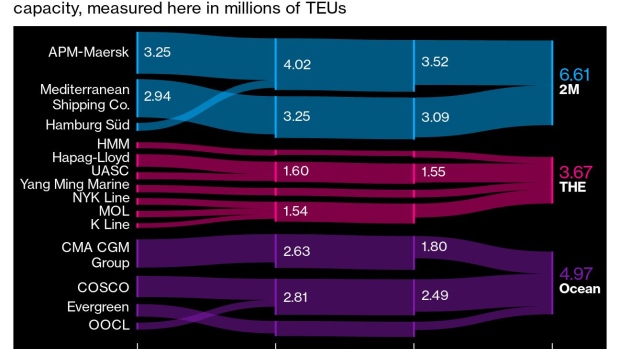 The law will stop “shipping companies taking advantage of American families, farmers, ranchers and businesses,” the president said at a signing ceremony for the broadly bipartisan measure -- an indication of the White House’s urgency to show voters it’s trying to bring down price increases stuck at a four-decade high.

“They raked in the profits and the costs got passed on, as you might guess, directly to consumers,” he added. “Sticking it to American families and businesses because they could.”

The shipping measure seeks to alleviate supply-chain bottlenecks at sea that were exacerbated by a spike in demand during the pandemic. It directs the Federal Maritime Commission to prevent ocean carriers from unreasonably refusing to fill open cargo space with US exports and to investigate late fees charged by shippers.

Biden said the law would “at least marginally” reduce inflation. It doesn’t directly address elevated shipping costs that American importers and exporters have long complained are the heart of the problem, though backers of the bill predicetd it would have an overall chilling effect on prices.

American importers and exporters say that Asia- and Europe-based firms controlling 80% of global seaborne capacity are immune from US antitrust laws and need to be held accountable for pandemic-driven cost increases, an argument the White House has embraced.

“One of the factors affecting prices is this: nine major shipping companies consolidated into three alliances controlling the vast majority, mostly shipping in the world,” Biden said. “And each of these nine is foreign-owned. During the pandemic, these carriers increased their prices by as much as 1,000%.”

US Shipping Law Won’t Do Much to Cut Cargo Costs: Supply Lines

Biden has sought to assure Americans that inflation is his priority after consumer prices soared 8.6% in May from a year earlier, while fears intensify of a recession on the horizon.

During a visit last week to the Port of Los Angeles, the US’s busiest maritime hub, Biden said foreign shippers need to understand “the rip-off is over.”

High prices to ship containers of goods have driven inflation for imports and sapped profits of exporters, including farmers, said Senator Amy Klobuchar, the bill’s sponsor.

“The goal is lower prices. We must bring prices down,” she said. “I think the effect will be more immediate than the actual rules, when the rules take effect, because the shipping conglomerates know this is coming.”

Yet FMC Chairman Dan Maffei acknowledged that the legislation “isn’t the be-all and end-all, it’s not everything we asked for.”

Speaking Wednesday at a conference in Tacoma, Washington, Maffei said, “There’s stuff missing. We want more stuff in the future.”

Maffei said that the law will address some key complaints, such as forcing carriers to take US exports instead of sending ships sprinting back to Asia with empty containers in order to load more US-bound goods faster.

“That hurts the entire economy, but especially hurts our farmers who depend on ocean shipping to sell their products to customers overseas,” Biden said.