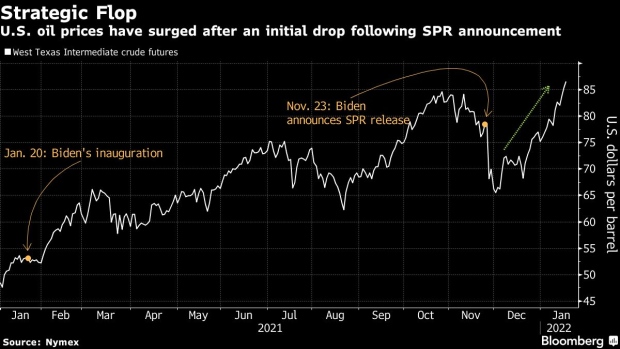 (Bloomberg) -- Joe Biden pledged on Wednesday to push oil prices lower and spare consumers pain at the gas pump, but his efforts so far have failed and he’s got few options left.

U.S. crude prices are now higher than they were in October, when the White House announced a release from the country’s emergency stockpile in coordination with allies. And while unleaded gasoline prices have fallen since a November peak of $3.42 per gallon, they’re climbing again.

It’s a political challenge for Democrats hoping to retain control of the House and Senate in November’s mid-term elections as well as for Biden, who enters his second year in the White House facing the likely failure of sweeping social spending and voting rights legislation.

“There are very few energy-related topics that voters can relate to better than gasoline prices, and oil is the heart of the gasoline price,” said Kevin Book, managing director of research firm ClearView Energy Partners. Yet “oil market interventions are difficult.”

Oil is surging amid strained supplies that have not kept up with demand as the world emerges from the Covid pandemic. Futures in New York reached $86.96 per barrel on Wednesday, the highest since October 2014, and shares of oil companies are soaring.

On Wednesday, Biden defended his approach, saying his coordinated release of oil reserves helped lower gasoline prices and promising “to continue to work on trying to increase oil supplies.”

“I think that’s the place where most middle class people, working class people get hit the most,” Biden told reporters at a White House press conference. “They pull up to a pump and all of a sudden instead of paying $2.40 a gallon, they’re paying $5 a gallon. That’s going to be really difficult.”

But OPEC+ producers have largely kept to their own timetable for increasing output, despite Biden’s urging for more crude. The releases from the U.S. Strategic Petroleum Reserve and the stockpiles of other countries yielded limited short-term impact. One of the countries, China, has so far not delivered.

The volume of the U.S. release totaled about 50 million barrels -- a drop in the bucket against global demand the International Energy Agency estimates will reach pre-pandemic levels of 99.7 million barrels a day this year.

The oil price has kept relentlessly rising throughout all the interventions, Book said, and “not one of them seems to have done the trick.”

Biden’s options to address the oil supply-and-demand mismatch are partly limited by his green ambitions.

The administration has so far rejected the calls of oil industry leaders to aggressively sell leases to drill on public land and take other steps that could encourage production in coming years but run counter to the president’s goal of weaning the U.S. from fossil fuels.

And administration policies that promise to lower oil and gasoline demand -- such as by boosting electric vehicles -- are an even longer-term solution.

Energy Secretary Jennifer Granholm has directly appealed to oil executives, asking them to boost output during a meeting of the National Petroleum Council last month.

The industry has responded, said Mike Sommers, head of the American Petroleum Institute, with the Permian Basin now producing about 5 million barrels of crude each day. Drillers have also deployed more rigs in recent weeks -- with 11 added last week, the largest rise since October. Yet activity is still well below pre-pandemic levels.

“Producers are responding to increased prices, but we’re not getting a lot of regulatory certainty out of the administration despite their rhetoric that they do want us to produce more,” Sommers said.

Several factors are still suppressing the country’s production potential. Drillers have been opting for fiscal discipline over supply growth since coming out of the pandemic, and large publicly held producers are now cashing in on the oil rally. Some are also steering more money away from the oil patch toward renewables and other portfolios.

The rally in crude prices has buoyed the stock values of oil companies this year, making them some of the top performing blue chip firms. The S&P 500 Energy Index has gained nearly 49% from a year ago. It’s outpaced the 19% gain in the wider S&P 500 Index, where five of the top-performers are oil companies.

“Oil companies are making a lot of money right now,” said Collin Rees, U.S. program manager for the the environmental group Oil Change International. “It is good for oil companies.”

He cautioned against jettisoning climate policies in favor of more oil.

“We need to be careful and have the long term in mind,” Rees said. “I think the government needs to be careful they don’t use this cycle of high prices to invest in infrastructure that doesn’t make sense if the prices crash again.”

But Anne Bradbury, chief executive of the American Exploration and Production Council, said the threat of new environmental and financial regulations deters investment in new drilling.

“When the administration is sending signals to the market that this is not a good long-term investment and we’re going to discourage investment in these types of of companies, that has a huge impact,” Bradbury said.

The Biden administration has held just one sale of leases to drill on federal lands and waters -- a November auction of tracts in the Gulf of Mexico compelled by court order. It has yet to sell drilling rights on federal lands onshore, and a legally required schedule of offshore lease sales over the next five years is not expected to be in place when the current one expires in July.

Biden’s efforts to tackle oil and gasoline prices may backfire by making it look like he has more power over them.

Although the president “has very little influence over fuel prices,” Biden “effectively took ownership over fuel prices with the SPR release and OPEC lobbying,” said Benjamin Salisbury, director of research with Height Capital Markets.  “Now he is trapped owning an issue that he cannot control.”