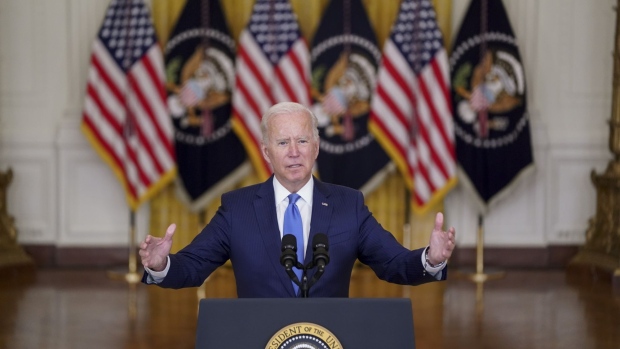 U.S. President Joe Biden speaks in the East Room of the White House in Washington, D.C., U.S., on Thursday, Sept. 16, 2021. Biden is set to ratchet up pressure on congressional Democrats as discord within the party threatened to derail key pieces of his economic agenda, including lowering prescription drug prices and some of his proposed tax hikes on the wealthiest Americans. , Bloomberg

(Bloomberg) -- President Joe Biden will host a virtual discussion of climate change with world leaders Friday as he tries to accelerate efforts to slash greenhouse gases amid concerns that commitments are lagging before a pivotal United Nations summit.

The leader-level summit is expected to be a sober assessment of global progress – or lack thereof – six weeks ahead of the UN gathering in Glasgow, which climate activists and government officials have described as a make-or-break moment to curb climate change.

The discussions take place as the White House concedes its biggest challenge has been persuading nations to bring a sense of urgency and plans for concrete actions to the summit in Scotland, according to a senior U.S. official who requested anonymity to preview the closed-door meeting.

The president is hoping to use the Friday meeting to push members of the Major Economies Forum – a mix of advanced and developing economies – to up their ambitions, including through a new pledge to reduce methane emissions, according to the U.S. official.

The U.S. is asking countries to slash emissions of the greenhouse gas – which is a powerful driver of global warming – by at least 30% before the end of the decade, according to a background memo distributed to the leaders invited to Friday’s session seen by Bloomberg News.

But Biden’s cajoling comes as he himself is struggling to deliver substantial progress toward reversing climate trends. He spent much of the past week attempting to convince reluctant Democratic lawmakers to support social spending and infrastructure proposals that the White House has portrayed as crucial to his climate campaign amid worries about inflation and spiraling deficits.

The White House sought to downplay expectations for Friday’s session, saying it did not anticipate countries to publicly announce or commit to new agreements coming out of the discussion. The U.S. did not release the names of expected participants ahead of time, but attendance was not expected to be at the same level as the public meeting of the group Biden convened in April that saw participation from 40 world leaders, including China’s Xi Jinping.

Still, the U.S. is hoping the impending global meeting could spur action from recalcitrant nations. Scientists warned Wednesday that existing national pledges to slash greenhouse gas emissions are not enough to keep temperatures from rising beyond 1.5 degrees Celsius, a threshold seen key to staving off the worst impacts of climate change.

In addition to the virtual summit on Friday, United Nations Secretary General António Guterres announced he would be holding his own informal meeting on climate on the sidelines of the General Assembly meeting next week in New York. Heads of government, including U.K. Prime Minister Boris Johnson who is hosting the Glasgow summit, are expected to attend Guterres’s session.

One major topic on the agenda Friday is likely to be international climate finance, amid a growing clamor for the U.S. and other wealthy nations responsible for the bulk of global warming to commit to spending more money helping developing countries protect tropical forests, build resilience and shift to clean energy.

Nearly 100 U.S. environmental, business and faith groups on Wednesday warned that “U.S. climate finance contributions are significantly behind that of other countries, which risks undercutting American efforts to maintain global influence.”

The investments are seen as critical to driving more ambitious climate pledges at the summit in Glasgow from Oct. 31 to Nov. 12. Leaders of Indonesia, Brazil and other nations made clear during Biden’s last big climate forum, in April, that their own greenhouse gas cuts should be explicitly tied to aid from richer nations.

Biden in April pledged $5.7 billion in climate finance annually by 2024, but environmental activists have called for the U.S. to make an immediate $3.3 billion down payment and another $8 billion by 2030.

The European Union has already provided nearly four times as much as the U.S has pledged in climate finance -- and that gulf is set to grow with the bloc’s announcement Wednesday it would contribute an additional 4 billion Euros ($4.7 billion).

“We expect the United States and our partners to step up too,” European Commission President Ursula von der Leyen said. “Closing the climate finance gap together -- the U.S. and the European Union -- would be such a strong signal for global climate leadership. And it is time to deliver now. We have no time to wait.”

Some of the world’s poorest and most climate vulnerable countries are expected to float a proposal in the coming days that would allow them to use emergency debt restructuring to free up money budgeted to pay back richer nations for previous spending, and instead use that money on climate resilience projects.

“The money that they took in loans was to build roads and bridges, housing projects, schools, hospitals, infrastructure of all sorts of types. And that infrastructure is now under stress because of the extreme weather,” said former Maldives President Mohamed Nasheed, who serves as ambassador to the Climate Vulnerable Forum. “And therefore, the assets created by the loans are now technically stranded, in some cases to the extent that we might not have an island or a currency. So it’s hardly possible for us to pay the debt when our countries are not around.”