The violent swings in global markets are spurring massive reversals in exchange-traded funds.

The US$116 billion Vanguard S&P 500 ETF, or VOO, took in US$1.7 billion last week -- following its worst outflow since October, according to data compiled by Bloomberg. Meanwhile, BlackRock Inc.’s iShares 1-3 Year Treasury Bond ETF, or SHY, lost almost US$1.5 billion in the span after five straight weeks of inflows.

Dramatic swings have been the rule in global markets this month as investors try to price in the coronavirus outbreak that has shut down economies, put millions out of work and made it all but certain corporate earnings will drop. The S&P 500 Index climbed for the fourth time in five days even after a weekend full of negative pandemic news.

“We see volatility just roaring through for a while,” said Gene Goldman, chief investment officer at Cetera Investment Management. “Each day brings new information about how to think about the future, it’s going to be a day-by-day situation.”

Here are some other highlights:

Flows into funds tracking the S&P 500 have been on a roller-coaster. The US$232 billion SPDR S&P 500 ETF Trust, or SPY, saw US$7.7 billion in withdrawals in the five days through March 27, following three weeks of massive inflows. Meanwhile, the US$160 billion iShares Core S&P 500 ETF, or IVV, took in US$499 million after losing US$6.6 billion in the previous week.

Bets on technology stocks have been whipsawed amid debate over the ability of industry giants to weather the coronavirus impacts -- with some investors viewing the sector as a safe place. Still, that didn’t stop Invesco QQQ Trust Series 1 ETF from losing US$974 million last week after gaining almost US$4.3 billion in the previous one, its best in 20 years.

The rush for cash-like debt ETFs slowed down, with the US$22.4 billion SHY posting its worst week since June. Meanwhile, SPDR Portfolio Short Term Treasury ETF, or SPTS, saw its worst week on record -- losing US$1.1 billion. 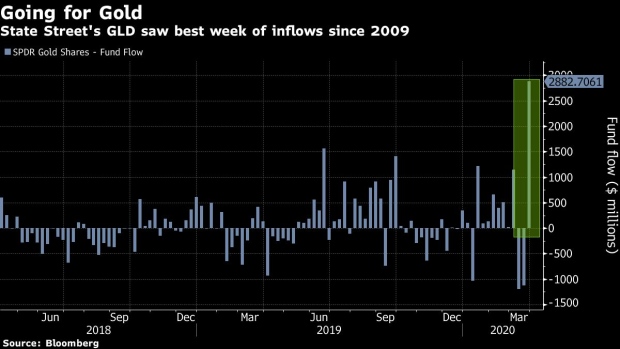 Bullion futures had their best weekly performance since 2008 as governments laid out fiscal stimulus while central banks started pumping in more money into the financial system to cushion the economic fallout from the coronavirus. Goldman Sachs Group Inc. analysts wrote last week that gold may have reached an inflection point.

“From here on, it will depend on how risk-on, risk-off the market is,” said Fabiana Fedeli, global head of fundamental equities at Robeco. “Gold will always have some short-term periods of volatility if it is required to cover positions in the market.”