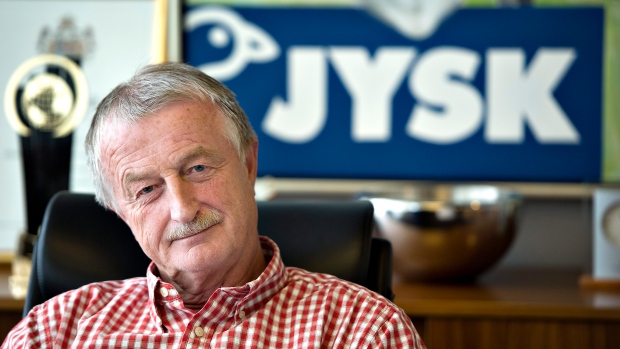 Lars Larsen, the founder of retail furniture chain Jysk and one of Denmark’s richest men, has died. He was 71.

Larsen died in his home in Silkeborg, western Denmark, on Monday, the company said in a statement. He had stepped down as Jysk’s chairman two months earlier after being diagnosed with cancer.

Larsen was known for his ability to drive down costs at his companies and nurtured his image as a businessman who was able to strike good deals. For decades, he starred in Jysk’s TV commercials, making him a public figure in Denmark. At the time of his death, Larsen was one of Denmark’s richest people with a fortune of more than US$3 billion, according to the Bloomberg Billionaires Index.

Lars Kristinus Larsen was born on Aug. 6, 1948, in Arnborg, western Denmark. He started as an apprentice in a retail store in 1966 and went on to open his own company in 1979, founding Jysk with US$20,000 of savings. He expanded the business to a retail chain, which focused on low-cost domestic merchandise such as bed linen and garden furniture. Today the company operates more than 2,700 stores in over 52 countries with an annual revenue of about US$4 billion.

“Denmark has lost one of its giants,” Brian Mikkelsen, the head of the Danish Chamber of Commerce and a former business minister, said in a tweet.

In an interview with Bloomberg in 2013, Larsen characterized his feelings toward his company along the same lines as those between a father and his child.

“I will sell all other things before Jysk,” he said. “That’s my baby, and you don’t sell your baby.”

Larsen is survived by his wife Kristine, their two children and four grandchildren. His son Jacob Brunsborg, 47, has replaced him as chairman at Jysk.