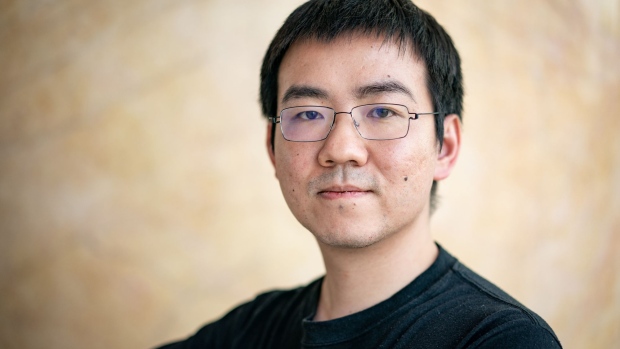 (Bloomberg) -- Bitmain Technologies Ltd.’s billionaire Chief Executive Officer Wu Jihan is back in the driver’s seat following the ouster of his co-founder, touting new sales initiatives to attract clients as the company fends off rivals.

Wu hosted a client meeting on Saturday, according to attendees who asked not to be identified because the event was private. It was his first public appearance since a power struggle six weeks ago when he announced as founder and chairman that his co-founder Micree Zhan Ketuan was no longer with the company. It also marked Wu’s re-emergence as the company’s CEO following his loss of control to Zhan, who had held de facto leadership from March until his resignation.

Wu and other Bitmain executives announced at the event new sales initiatives to lure customers, including a promise to seek deposits as low as 20% for those who buy its Bitcoin mining rigs in large bulk, the attendees said. Usually, such deposits are 50% or full payment in advance is required. The latest models from Bitmain cost between $1,000 to $2,000. “The Bitmain you are familiar with is back,” read a presentation slide from the gathering, which took place in southwestern China’s Chengdu city, a hub for local miners. Nishant Sharma, a Bitmain spokesman, declined to comment.

Bitmain revived plans for a U.S. listing earlier this year after its failed attempt in less crypto-friendly Hong Kong in 2018. The company, which was valued at about $15 billion in a private funding round last year, is grappling with intensifying competition from smaller rivals U.S.-listed Canaan Inc. and MicroBT.

Canaan had a 22% market share of Bitcoin mining machines in terms of computing power sold in 2019’s first half, up from 15% for the same period last year, according Frost & Sullivan figures cited in Canaan’s IPO prospectus. While Bitmain and its major rivals produce machines with similar specs and prices, they live and die competing against each other -- and smartphone makers -- for tight chip supplies from foundries operated by Taiwan Semiconductor Manufacturing Co. and Samsung Electronics Co.

Bitmain’s two co-founders had long served as co-CEOs but they had been replaced this March by Zhan’s pick, Wang Haichao, as the company was grappling with lay-offs and a cash crunch triggered by Bitcoin’s price plunge. Wang is still employed by the company.

In October, Wu announced Zhan’s resignation in a memo, warning employees against taking further instructions from Zhan or attending any meetings he convened. The two had started the mining gear company together six years ago.

Saturday’s event reaffirms Wu’s control of the company. Fan Xiaojun, a long-time Bitmain sales chief who had been demoted by Zhan, showed up at the meeting and had regained his position, said the attendees. Bitmain also promoted Wu’s new crypto financial startup Matrixport at the event, they said. Right after Wu’s note about Zhan’s departure, Wu also announced his pick for the company’s head of human resources to replace Zhan’s appointee, according to a memo viewed by Bloomberg News.

To contact the editors responsible for this story: Peter Elstrom at pelstrom@bloomberg.net, Colum Murphy