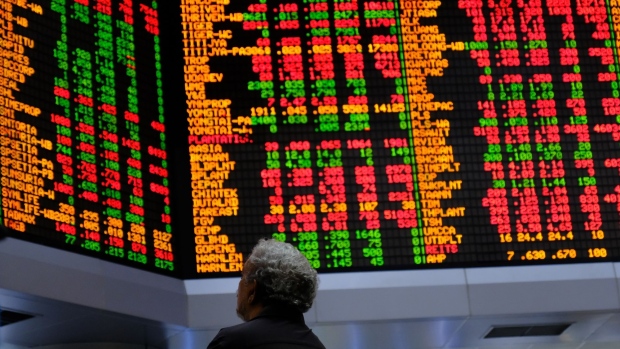 A person looks at stock prices displayed in the trading gallery of the RHB Investment Bank Bhd. headquarters in Kuala Lumpur, Malaysia, on Tuesday, Feb. 17, 2020. Malaysia is restricting people's movement nationwide to limit the spread of the coronavirus. The country is banning all visitors, and residents are barred from traveling overseas while places of worship, schools and business premises will be shut except for markets that supply daily needs, Prime Minister Muhyiddin Yassin said in a televised address late Monday. Photographer: Samsul Said/Bloomberg , Bloomberg

Few things divide opinion on Wall Street like the outlook for small-cap stocks or the fate of the value strategy. Yet most market players would probably agree it’s a tough time to launch a product combining the two.

That’s exactly what BlackRock Inc. is doing with a new exchange-traded fund.

The iShares Factors US Small Cap Value ETF began trading on the New York Stock Exchange under the ticker SVAL on Thursday. The fund screens for value-oriented stocks in the Russell 2000 Index based on liquidity, volatility, leverage and analyst sentiment and then weights securities equally.

It’s an eye-catching arrival given the backdrop. Small-cap shares and value strategies have been battered anew this year as the coronavirus sparked an economic crisis. U.S. equities endured yet another bout of volatility this week, a broad selloff that has spared few sectors.

Even after those declines, the S&P 500 Index has still gained 1.2 per cent year-to-date. The Russell 2000 Index, by contrast, is roughly 7.5 per cent lower and value stocks -- those that look cheap relative to fundamentals -- are down more than 15 per cent.

“Our value exposure was really in the large- and mid-cap space, and we didn’t have a dedicated small-cap fund,” Bob Hum, BlackRock’s U.S. head of factor ETFs, said in an interview. “On a forward-looking basis, the future is much brighter than it has been the past few years and we wanted to make sure our lineup has all the exposure our clients are looking for.”

The renaissance of value has eluded investors for years, though there have been plenty of head-fakes in the past few months.

The Russell 1000 Value Index beat its growth counterpart by over 2 percentage points in September for its biggest month of outperformance in a year. On a five-year basis, however, value has trailed growth by nearly 93 percentage points.

Meanwhile, large-cap companies -- led by a handful of technology names -- have trounced small-cap shares over that time period. The S&P 500 has climbed nearly 57 per cent since late 2015, while the Russell 2000 has gained about 32 per cent.

Still, Hum expects SVAL to attract interest once economies start to reopen broadly, and points to recent demand for value and small-cap funds.

In defiance of the lackluster performance, value-focused ETFs have attracted about US$10 billion of inflows so far in 2020, according to data compiled by Bloomberg. Small-cap equity ETFs have absorbed US$530 million.