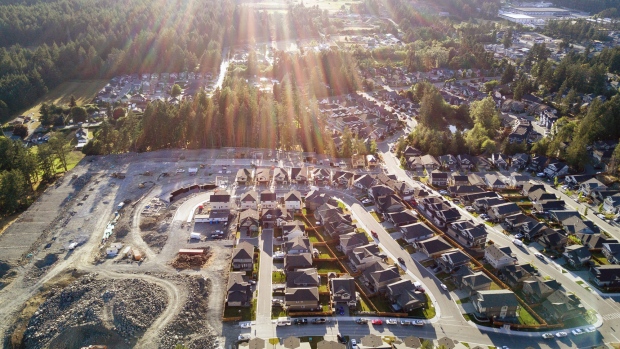 Homes under construction are seen in this aerial photograph taken above the Langford suburb of Victoria, British Columbia, Canada, on July 14, 2018. , Bloomberg

Bank of Montreal (BMO.TO), Canada’s fourth largest bank, is working toward expanding the investor base for residential mortgage-backed securities just as Bank of Canada’s governor Stephen Poloz highlighted the idea of having such a market as a useful funding and risk management tool.

Instead of RMBS, the Federal agency known as Canadian Mortgage Housing Corporation has been securitizing pools of government-guaranteed home-loans. The agency deals are the largest market funding source for the country’s mortgage credit with a 30 percent market share, according to its latest annual report. No lender has priced a Canadian RMBS since September when MCAP sold $254 million of the notes.

Stephen Poloz delivered a self-described “call to arms” to diversify Canada’s mortgage market and give borrowers a wider range of options to choose from in a speech Monday in Winnipeg. CTV’s Chief Financial Commentator Pattie Lovett-Reid discusses.

“There’s an ongoing education job around investors just to highlight the difference between that product and the CMHC product, and we are investing in that so that the market grows over time," Bank of Montreal Chief Financial Officer Tom Flynn said in an interview Wednesday. The RMBS “market is not nearly as developed as the CMHC mortgage bond market is. I would say our hope is over time that market will grow, and the banks generally I believe are interested in issuing that product.”

Canadian banks should offer home loans with longer duration than five years -- which is the most popular type of product in the country -- as part of the measures to increase the resilience of its housing market, Poloz said earlier this month. The RMBS market could provide the right type of financing for that purpose.

“It could be helpful for both lenders and borrowers for Canada to develop a private market for mortgage-backed securities,” Poloz said in a May 6 speech in Winnipeg.