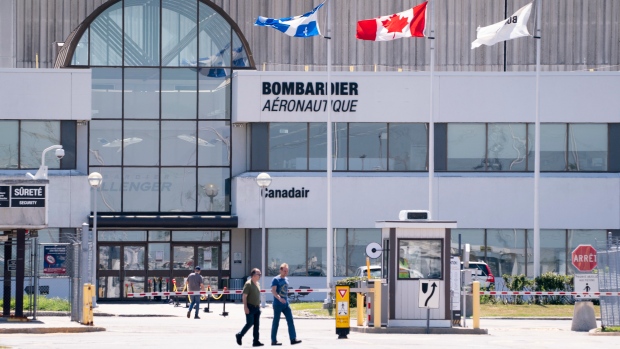 MONTREAL -- Bombardier Inc. will receive less cash than it originally had agreed to in the sale of its aerostructures business to Spirit AeroSystems Holding Inc.

Spirit will also assume liabilities, including government refundable advances and pension obligations, valued at US$824 million, up from US$700 million previously announced.

He said proceeds from the sale will strengthen its cash position as it reshapes its capital structure and address financial changes.

The sale includes operations in Belfast, U.K., and Casablanca, Morocco, as well as a maintenance, repair and overhaul facility in Dallas.

Concerns about the future of the deal were raised last month after Spirit said some closing conditions were unmet, injecting a degree of uncertainty into the deal.

Bombardier said Monday the closing conditions have been met and the transaction is expected to close on Friday.

Analyst Walter Spracklin of RBC Dominion Securities Inc. said the update was largely neutral with the sale of the aerostructures business mainly bridging the company until the sale of its railway division to France's Alstom.

"Overall, while less than what investors had expected, we do see the successful sale of the aerostructures business (and the subsequent cash proceeds) as another step forward in BBD's transition to a pure-play biz-jet company, and see the company as sufficiently funded (from a liquidity perspective) until the sale of BT to Alstom," he wrote in a report.