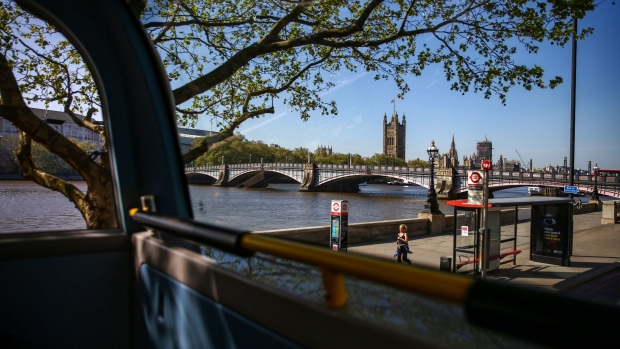 The Houses of Parliament stand in this view from inside a bus in London. Photographer: Hollie Adams/Bloomberg , Bloomberg

Boris Johnson’s chief Brexit negotiator accused the European Union of offering Britain only a “low-quality” trade deal as talks between the two sides descended into acrimony.

In a dramatic intervention in the increasingly fractious negotiations over the future terms of U.K.-EU trade, David Frost complained that the bloc was treating Britain as “unworthy” of a fair deal. He told his EU counterpart Michel Barnier to “think again.”

“We find it perplexing that the EU, instead of seeking to settle rapidly a high-quality set of agreements with a close economic partner, is instead insisting on additional, unbalanced, and unprecedented provisions in a range of areas, as a precondition for agreement between us,” Frost wrote in a four-page letter published on Tuesday.

Frost said the EU was offering “not a fair free trade relationship between close economic partners, but a relatively low-quality trade agreement coming with unprecedented EU oversight of our laws and institutions.”

The letter is likely to raise tensions even further in the negotiations which have effectively reached an impasse. After the last round of talks concluded on Friday Barnier said he was pessimistic about the chances of an agreement.