Canadian market positioned to outperform the U.S. over next few years: Portfolio manager

Investors in Canada are piling back into exchange-traded funds at levels not seen since the start of the COVID-19 pandemic.

Canadian ETFs attracted net flows of $4 billion in June, the most since February. About $2.5 billion went into equity funds, with the money spread among regions in a “remarkable display of risk appetite on the part of ETF investors after waves of pandemic-induced volatility,” Daniel Straus, vice president of ETFs and financial products research at National Bank of Canada, said in a report.

The strong June brought ETF inflows to $22.4 billion for the first half of 2020, more than double the amount in the first half of last year, Straus said. It’s the largest amount of new ETF money in a half-year calendar period in the past decade, making it “one for the history books,” he added.

Two-thirds of that money went into equity funds.

A third of the new capital in June, or $1.3 billion, flowed into fixed income — the most of any month this year — and the rest into multi-asset and commodity ETFs. 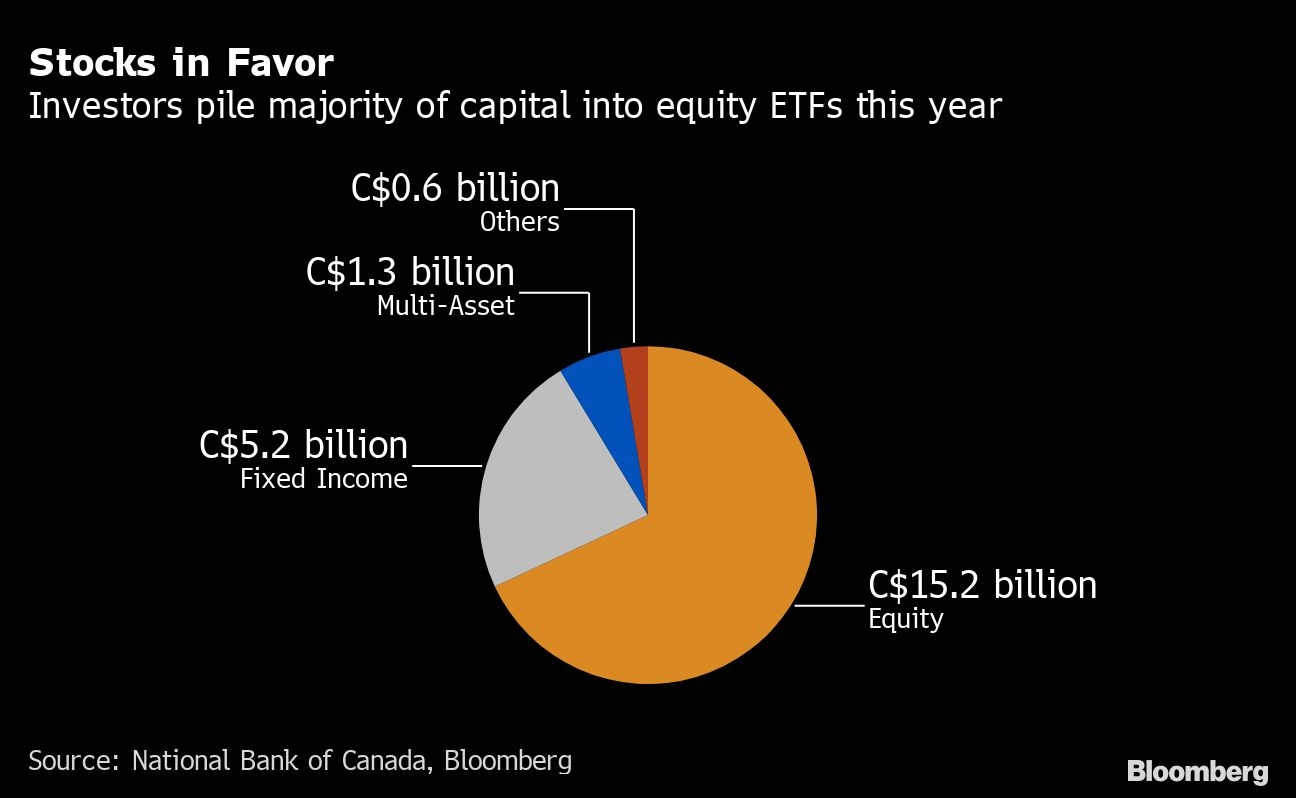 “Last year, fixed income dominated inflows, but this year equity ETFs has attracted $15 billion so far, surpassing all other asset classes,” he noted. The S&P/TSX Composite Index is down almost eight per cent so far this year.

While the risk-on momentum has returned, some investors are still looking for shelter. In the first half of the year, almost $1.4 billion flowed into two high-interest savings ETFs: CI First Asset High Interest Savings received $991 million in new capital and Horizons Cash Maximizer ETF got $396 million. Last year, the so-called cash ETFs garnered $2.6 billion in capital.

“These ETFs will be popular in any market environment, given that they’re easier to use than opening up a new bank account and they are very efficient for advisers since they can bulk trade for all their client accounts in one order,” said Steve Hawkins, chief executive officer at HorizonsETFs Management (Canada) Inc.

Two of Horizons’ ETFs are in the top spots for total inflows this year. Its Horizons S&P/TSX Capped Composite Index ETF and Horizons Canadian Select Universe Bond ETF attracted $2.5 billion in capital for the first half of 2020, according to the report, making up about 10 per cent of inflows.

Last year, HorizonsETFs reorganized a slew of ETFs into a corporate fund structure to make them more tax efficient for investors. Both of the top ETFs are part of the company’s corporate-class funds that aren’t expected to pay any taxable distributions, Hawkins said.