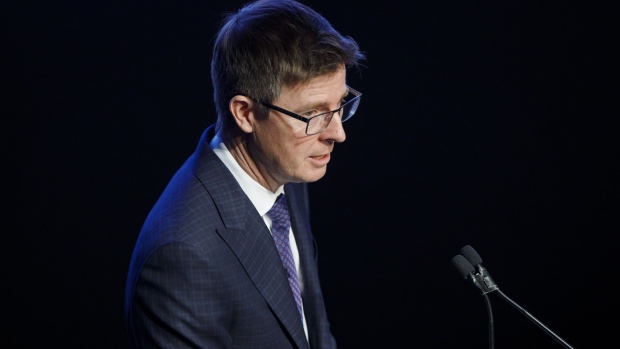 Galen Weston, chief executive officer of Loblaw Cos., speaks during the company's annual general meeting in Toronto, Ontario, Canada, on Thursday, May 2, 2019.

Canada’s top 20 billionaires only got richer during COVID-19, gaining an average of $2 billion each while millions of Canadians lost their jobs and struggled with the economic consequences of the pandemic, according to a report from the Canadian Centre for Policy Alternatives.

Shopify Inc. CEO Tobi Lutke and Lululemon Athletica Inc. founder Chip Wilson saw an increase of $6.6 billion and $2.8 billion respectively since March, according to data compiled by Forbes through its “real-time billionaires list,” while the Thomson family fortune amassed the highest wealth increase at $8.8 billion.

“Throughout this pandemic, we've been told ‘we're all in this together,’ but our research shows this is far from true," Michal Rozworski, a CCPA-BC research associate, said in a release.

The latest jobs report released by Statistics Canada found that employment numbers have dropped 1.1 million since the beginning of the pandemic, with low-wage workers being hit the hardest. According to Statistics Canada, women and racialized Canadians are overrepresented in low-wage jobs, further deepening the disparity of individual economic recovery within Canada.

Alex Hemingway, an economist and public finance analyst at the Canadian Centre for Policy Alternatives’ B.C. Office and lead author of the report, highlighted this divide.

“At the same time as billionaires like Loblaws owner Galen Weston have seen their wealth balloon, front-line workers stocking shelves and scanning groceries at his stores have continued to risk their health and that of their loved ones by coming into work,” he said in the release.

“To add insult to injury, front-line grocery store workers have had their $2 per hour ‘pandemic pay’ clawed back while the grocery store owners made huge profits.”

Shares of Loblaw Companies Ltd. rose after the company cut pay for workers in June. Meanwhile, Weston’s personal fortune increased by $1.6 billion, according to Forbes’ data.

Both Hemingway and Rozworski, are advocating for increased economic fairness in Canada, calling on measures like corporate tax reform and a wealth tax.

“Even before the pandemic, Canadian billionaires held nearly 4,500 times the wealth of the typical family,” Hemingway said. “Both an emergency, one-time excess wealth tax and an annual wealth tax should be on the table.”