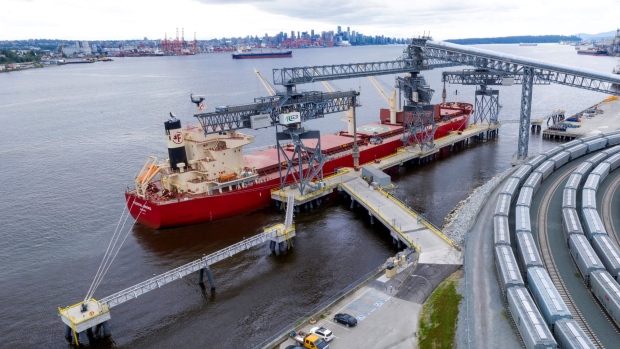 A Canadian crop trader is betting its new high-speed grain-export terminal in Vancouver, the first to be built since the 1960s, will help it beat the competition and win over clients in growing markets in Asia.

G3 Global Holdings this week opened the terminal at the port of Vancouver, boasting 180,000 metric tons of storage and the ability to unload a train in about eight hours, faster than any of its peers. The facility is part of a strategy to move grain from Canada’s prairies to the West Coast as it eyes markets including China and Indonesia, the second-largest wheat buyer.

The opening comes at a time when Canadian exports from the West coast are booming even as simmering tensions with China stymie canola shipments from Richardson International and Glencore Plc’s Viterra unit, two key exporters and G3 rivals. China is a major buyer and a big part of the company’s long-term plan, said Brett Malkoske, G3’s vice president of business development.

“Wheat and canola are probably our two prime commodities and I think the markets for both those commodities in Asia are no secret,” G3’s Chief Executive Officer Don Chapman said in a telephone interview on Tuesday. “We assume China is going to be in the market for the foreseeable future, notwithstanding any hiccups that happen from time to time.”

China suspended the canola licenses of Richardson and Viterra last year, citing pest and quarantine concerns. The move, which could eventually create opportunities for G3, was widely interpreted as retaliation over the arrest of a Huawei Technologies Co. executive in Vancouver.

G3’s Vancouver terminal can export 8 million tons of crops a year, a huge amount for a port that shipped 23.5 million tons in the 2018-19 season. The company, a joint venture between U.S. crop giant Bunge Ltd. and the Saudi Agricultural & Livestock Investment Co., has already loaded nine vessels from the Vancouver facility, which has the Western Stevedoring Co. as a partner.

The company used the test shipments of wheat and canola to improve speed and efficiency, key to its strategy, Chapman said. G3 has been expanding throughout Canada, building a network of high-efficiency grain elevators on the Prairies that can workaround rail capacity squeezes that have plagued Canada’s grain handling system.

All facilities, including the Vancouver terminal, are equipped with loop tracks, allowing locomotives to stay attached and preventing the train from having to be split while cars are being filled or grain being delivered. The system provides better efficiency and velocity and allows G3 to be more competitive for available rail capacity against its competitors in grain along with other commodities shipped by rail, including coal and potash.

“We’ve adopted a model here that’s as close as possible to a train that never stops moving,” Chapman said.

G3 has built nine inland grain elevators and has another five under construction, Chapman said. Still, its network remains small relative to other major grain handlers who have established facilities and deep roots in the prairies, so it could take some time before the Vancouver terminal sees full capacity utilization.