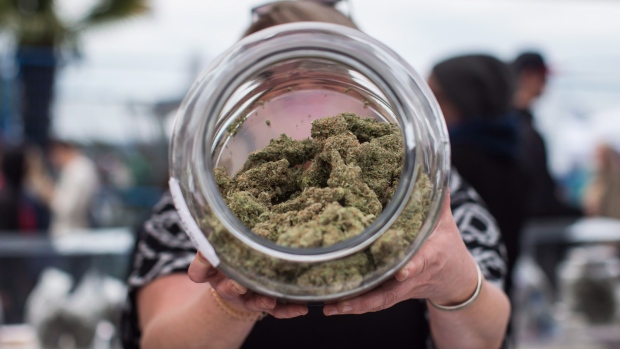 A vendor displays marijuana for sale during the 4-20 annual marijuana celebration in Vancouver on Friday, April 20, 2018. , THE CANADIAN PRESS/Darryl Dyck

Shares of Cronos Group tumbled Thursday after the company reported its fiscal first-quarter results. Investors soured on the Toronto-based company’s stock after its CFO noted that the company’s adjusted earnings before certain items would decline over the course of 2019, but should ramp up for “accelerated growth” in 2020. Cronos reported first-quarter revenue of $6.5 million, down from the $7 million analysts were expecting. Meanwhile, the company sold 1,111 kilograms of cannabis in the quarter, up 122 per cent from the same period a year earlier. Gross margins rose to 54 per cent from 47 per cent a year ago. Cronos CEO Mike Gorenstein added revenue is expected to remain “relatively stable” in the second quarter, then accelerate in the back half of the year.

Despite being the first developed country to legalize cannabis, a lack of forward-thinking government policies has meant Canada’s cannabis industry is operating with “one hand tied behind their back,” according to one Bay Street investor and an early supporter of the legal marijuana industry. Neil Selfe, chief executive of Toronto-based Infor Financial Group, told BNN Bloomberg on Thursday the Canadian government legalized cannabis without a lot of forethought to capital allocation, products, brands, and distribution. That’s resulted in Canadian firms lagging behind their U.S. counterparts in terms of both revenue and investors’ interest. Selfe added the so-called cannabis bubble is beginning to shrink as investors turn their focus to the U.S. and other markets.

It turns out Canadians’ outlook for legal cannabis is less rosy that previously believed. A new study co-authored by Dalhousie University and the University of Guelph found support for recreational cannabis among Canadians has dropped since the drug was legalized last year following the shaky roll-out of legal pot and a still-robust black market. The study found half of Canadians support the legalization of recreational cannabis, down from about 69 per cent back in 2017. Meanwhile, uncertain sentiment surrounding legalization has grown to 20 per cent of the country, up from about seven per cent two years ago. Interest in cannabis-infused edible products — expected to hit store shelves later this fall — has also waned with about 36 per cent of people polled saying they plan to buy edibles when they become available on the market, down from 46 per cent in 2017.

Aurora Cannabis got the nod once again by Luxembourg as the country’s exclusive supplier of medical cannabis. This will mark the second order Aurora has supplied for the government of Luxembourg. While the Luxembourg medical cannabis market is relatively tiny compared to say, Germany, it adds another name to the growing list of nations Aurora supplies. The deal is the most recent of many moves the Edmonton-based producer has made in international medical markets. Last month, Aurora announced it had been chosen to help supply the German market with medical cannabis. And late last year, the company formed a partnership with a Mexican pharmaceutical distributor and manufacturer to supply that country’s market.

Canopy Growth, the biggest cannabis company in the world, still needs some more domestic supply. The Smiths Falls, Ont.-based company has tapped PharmHouse to provide 30 per cent of its Leamington, Ont.-based flowering space as part of an offtake agreement. Using Canopy Growth’s genetics, PharmHouse will grow cannabis for 18 months in its greenhouse, returning the raw flower back to Canopy Growth to be sold under its brands. The deal is expected to produce 25,000 kilograms to 45,000 kilograms of cannabis per year. Interestingly, PharmHouse is a 49 per cent-owned joint venture of Canopy Rivers, the venture capital arm of Canopy Growth. PharmHouse previously announced a cultivation agreement with TerrAscend Canada Inc. to supply products from 20 per cent of the facility’s flowering space.

-- The approximate value of the purchase order delivered by Aleafia Health to an unnamed Canadian province, the biggest such delivery in the cannabis producer’s history. 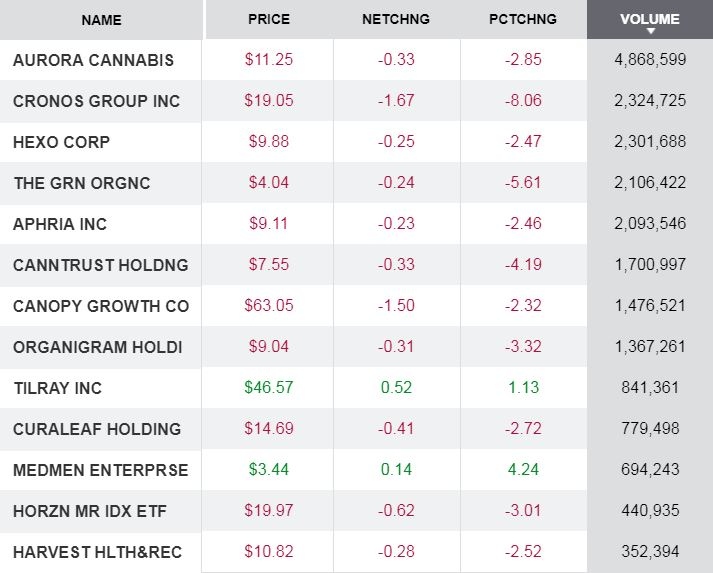