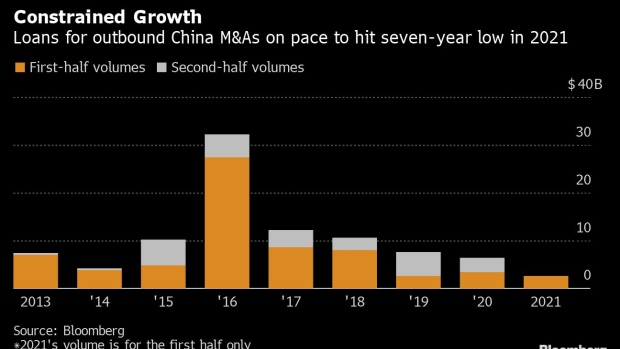 (Bloomberg) -- Chinese companies’ use of debt to pay for overseas expansion is on track to shrink to a seven-year low thanks in part to Beijing’s sweeping regulatory crackdown.

Foreign currency-denominated loans taken out by Chinese firms to finance outbound mergers and acquisitions shrank to $2.6 billion in the first half of this year, Bloomberg-compiled data show. That’s worse than the $3.4 billion a year ago in the depths of the pandemic. Anything less than about $1.7 billion in the second half would make this year the weakest for this corner of the debt market since 2014.

China Inc.’s overseas shopping spree has been cooling since 2017, as Beijing imposed curbs on the risks a debt-fueled binge could pose to the financial system, while the pandemic dampened appetite for leverage to expand abroad. Foreign scrutiny over purchases has also intensified amid Sino-U.S. tensions, particularly in the technology sector, while China’s sweeping regulatory crackdown has likely held back potential deal makers.

“Covid has made things a lot tougher -- companies were constrained financially and were typically not going to embark on large acquisitions,” said Christophe Cerisier, head of loan capital markets Asia Pacific at BNP Paribas SA. Closing international acquisitions has also become difficult as conducting due diligence and traveling to meet management are complicated, he said.

While nearly $20 billion of acquisition deals were recorded in January-June, close to the level seen in the second half of 2019, less than half were completed, according to data compiled by Bloomberg.

Real estate firms have disappeared from Bloomberg’s list of outbound M&A borrowers since 2018 amid government scrutiny, the latest being the “Three Red Lines” -- debt metrics that developers have to meet if they want to borrow more.

Borrowings from tech and education companies, which made up 27% of last year’s volumes, have dried up as European and U.S. regulators remain wary of Chinese investment amid Beijing’s greater oversight, fines and business limits on the sector.

Still, some bankers are hopeful that a steadying in China’s economic recovery and progress in vaccinations could help its M&A loan market warm up in coming months.