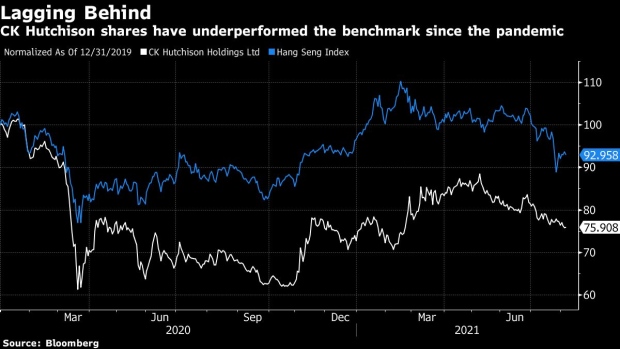 Shipping containers loaded on the hull of the OOCL Germany container ship, operated by Orient Overseas Container Line Ltd. docked at the Port of Felixstowe Ltd., a subsidiary of CK Hutchison Holdings Ltd., in Felixstowe, U.K., on Thursday, June 24, 2021. The skyrocketing price of shipping goods across the globe may hit your pocketbook sooner than you think -- from that cup of coffee you get each morning to the toys you may want to buy for your kids. Photographer: Chris Ratcliffe/Bloomberg , Bloomberg

(Bloomberg) -- CK Hutchison Holdings Ltd. saw profit surge 41% in the first half of the year, as retail and ports bounced back strongly in its key markets which have started to recover from the pandemic.

The flagship firm of Hong Kong billionaire Li Ka-shing’s conglomerate reported a net income of HK$18.3 billion ($2.4 billion) for the six months through June, according to a statement Thursday. Total revenue rose 12% to HK$212.4 billion for CK Hutchinson, which is part of the Li-founded CK Group. The company raised its interim dividend to HK$0.8 a share, compared with HK$0.614 a year before.

The CK Group, with businesses spanning ports, utilities, telecommunications, retail and real estate, is emerging from an exceptionally challenging year in 2020 which saw headwinds including the pandemic, China’s new national security law in the city and geopolitical tensions with the U.S. On the flip side, being a globally diversified group, it was relatively less exposed to risks like the local virus flare-ups and China’s crackdown on private firms.

“The group should be able to continue on its current growth trajectory and expects to deliver a solid performance for the full year in 2021,” CK Hutchison’s Chairman, Victor Li -- founder Li’s eldest son -- said in the post-earnings statement. But resurgent outbreaks in places that initially managed to curb the spread of Covid-19 remain a risk, he said.

CK Hutchinson makes more than half of its income from Europe and about 19% from geographies outside of Hong Kong and mainland China. As growth in its traditional sectors slows, the empire is pursuing more overseas deals to boost its income but facing headwinds.

The deal involves 24,600 tower sites, of which 24% are in the U.K. The two firms have completed transactions of towers in all other locations with CK Hutchison receiving 6.3 billion euros ($7.5 billion) in proceeds.

Talks with Qatar’s Ooredoo QPSC to combine their Indonesian wireless phone businesses have been underway since December but the deadline for exclusive negotiations, now at Aug. 16, has been extended twice. The companies said they needed more time to finalize the transaction that aims to fend off competition in Southeast Asia’s largest market.

The earnings may enthuse investors after seeing company’s shares lag Hong Kong’s benchmark Hang Seng Index since the coronavirus outbreak in China at the beginning of 2020. Its prices have slumped 24%, compared with a 7% drop of the index.

The property developer has seen further diversification this year through recent acquisitions in European infrastructure and utility assets from Li’s personal funds. They are meant to generate more recurrent income for the company. It’ll also get a part of the proceeds from ESR Cayman Ltd.’s Wednesday announcement to acquire ARA Asset Management Ltd. for $5.2 billion. CK Asset owns 8.3% of ARA, according to an exchange filing.

The firm managed to sell 13 units of its ultra-luxury 21 Borrett Road project in Hong Kong’s Mid-Levels for HK$3.2 billion in the first half -- a sign that the high-end market is improving even though travel restrictions with mainland China remain in place.

The trend of emigration from Hong Kong is another tailwind for the developer, which has a pipeline of residential developments in the U.K. Being a familiar name to Hong Kong immigrants, CK Asset could attract demand from these potential buyers, according to a note dated July 8 by Bloomberg Intelligence analyst Patrick Wong.